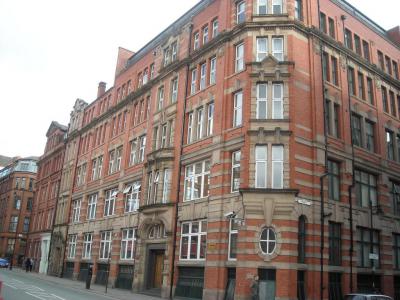 Running for a mile from east to west between Manchester’s Piccadilly and Deansgate stations, Whitworth Street is one of Manchester city centre’s most historic streets. The long lane runs alongside a rail viaduct, cutting through the southern side of the city centre – becoming Whitworth Street West for the western half of its diameter. The street is named after local manufacturer and philanthropist Sir Joseph Whitworth, creator of the Whitworth rifle. His works building once stood on Whitworth Street, part of the Edwardian industrial heritage Manchester is known for, and which can best be seen along this avenue.

Whitworth Street is characterised by the grand, well preserved Edwardian warehouses which line its length. The area developed after the opening of Manchester’s Ship Canal in 1894, which opened the city up to international maritime trade. Many buildings constructed in the early 20th century still remain, including Manchester University’s Sackville Street building and India House, both of which are Grade II listed buildings. The street also has links to Manchester’s recent history, with the former Hacienda nightclub situated in the middle of the street, and the still active Ritz nightclub located on Whitworth Street West. Both venues helped make Manchester arguably the musical capital of the UK in the late 20th century.
Image by Mikey on Wikimedia under Creative Commons License.