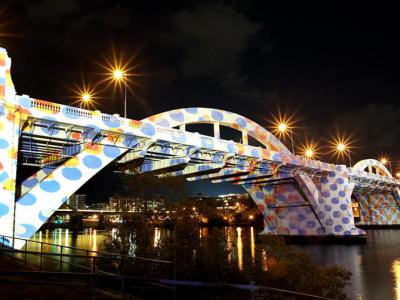 The William Jolly Bridge is a heritage-listed road bridge over the Brisbane River between North Quay in the Brisbane CBD and Grey Street in South Brisbane. It was designed by A E Harding Frew and built from 1928 to 1932 by M R Hornibrook Ltd.

The style of the bridge's design is Art Deco, which was popular at the time. Manuel R. Hornibrook's company built the bridge that consists of two piers that were built in the river and two pylons on the river banks, which support three graceful arches. The rainbow arch type, as it was described, was claimed to be the first of its type in Australia. It is a steel frame arch bridge with an unusual concrete veneer, treated to make it appear like "light-coloured porphyry".

When opened, during the worst year of the Great Depression, the bridge was known simply as the Grey Street Bridge. It was renamed to the William Jolly Bridge on 5 July 1955 in memory of William Jolly, the first Lord Mayor of Greater Brisbane. It was added to the Queensland Heritage Register on 6 August 1996.

In 2003 the bridge was a location for the filming of Inspector Gadget 2.

From 2009, the bridge is being used as a canvas for artistic light shows. Two towers, five metres high, are used to project images onto the bridge. The cost of the project was $2,000,000.
Image Courtesy of Wikimedia and Brisbane City Council.
Sight description based on Wikipedia.