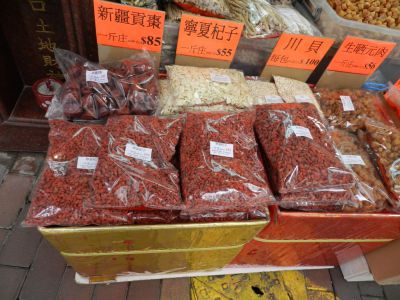 What to buy here: Goji Berries.

The history of herbal medicine dates back to China but many of its reliable practices and ingredients have been implemented in Hong Kong. For those wanting to offset their travel ailments, the goji berry is an affordable herbal supplement found in medicinal suppliers across the city. Popularised as wolfberries in the West, goji berries are often found in dried form and added to food and drink to enhance their nutritional content. Goji berries are cooked before consumption. They can be found added to rice porridge, dessert jellies, Chinese tonic soups, as well as in herbal teas. Goji berries have a mild tangy taste that is slightly sweet and sour. They resemble raisins in shape and texture. They have been known to improve the state of health, strengthen the immune system and increase longevity and vitality. Goji berries are one of the most affordable health supplements in Hong Kong and can retail for HK$40-HK$80 a bag, depending on the volume. Found in all herbal stores in Hong Kong, goji berries are readily available for health enthusiasts.