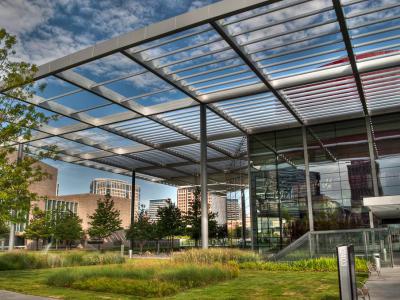 A 21st-century, state-of-the-art reinterpretation of the traditional opera house, the Winspear seats 2,200 in a circular horseshoe configuration. Designed by Pritzker Prize-winning architect Norman Foster, the iconic venue is engineered to suit opera, ballet, musicals and other performing arts. With its sleek red exterior, soaring glass facade and impressive acoustics, it has become the focal point of the city's Arts District, so you really owe it to yourself to make the visit.

In case of attending an event or concert, arrive early to marvel at the LED-lighted chandelier and get your photos, as it will disappear for showtime, retracting into the ceiling. Once retracted, it leaves the impression of a star-lit night, as each constituent acrylic rod has the ability to "twinkle" in the dark. Since 2013, the chandelier's traditional pre-performance ascent has been accompanied by an exclusively adapted piece – "The Light" by American composer Philip Glass.
Image by Marco Becerra on Flickr under Creative Commons License.