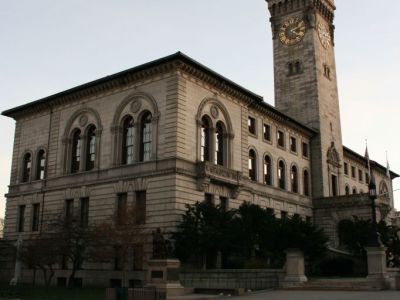 Worcester City Hall was built by the Norcross brothers at the end of the 19th century, replacing the Old South Meeting house, which was the first town hall. The construction's design was created by Robert Peabody and John Stearns and looks like an Italian palace. Built of blocks of granite, the City Hall preserves the characteristics of the Renaissance Revival style: grand staircases, its cupola, the use of columns, harmonious and elegant forms. The facade is centered by a clock-tower. The City Hall is currently the 4th tallest building in Worcester.
Image by Pmeleski on Wikimedia under Creative Commons License.
Sight description based on wikipedia