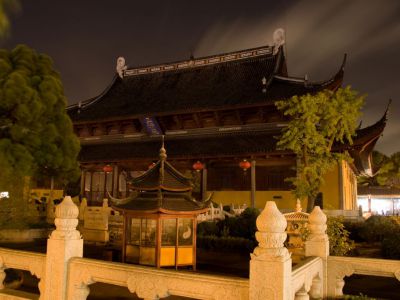 Xuanmiao Temple "Mysterious Sublimity Temple" or "Mysterious Essence Temple" is a prominent Taoist temple with a long history, located at the center of old Suzhou City.

The street along east-west direction in front of the temple is called Guanqian Street, a famed business pedestrian street in Suzhou. A lane called Gong Xiang along north-south direction leads directly to the gate.

Xuanmiao Temple was founded in Xianning 2nd year (AD 276), Western Jin Dynasty, and was initially named "Zhen Qing Dao Yuan". It was destroyed by wars in Southern Song Dynasty. It was rebuilt in Chunxi's years (1174–1189), and was renamed Xuanmiao Guan in 1264. In Qing Dynasty, due to the taboo against using the emperor Kangxi's name, Xuanye, the temple was renamed Yuanmiao Guan.
Image Courtesy of Wikimedia and Maros M r a z.
Sight description based on Wikipedia.