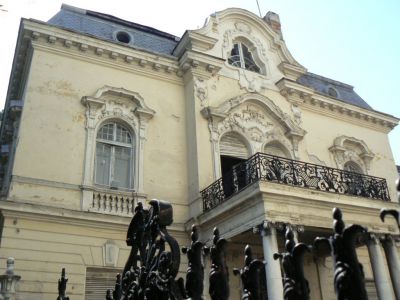 The Yablanski House is a Neo-Baroque house in Sofia, situated at 18 Tsar Osvoboditel Boulevard in the city centre and regarded as one of the highest achievements of the city's architecture in the first decade of the 20th century. Although the building was proclaimed a monument of culture in 1955, as of 2008 it is uninhabited and in a bad condition due to mismanagement.

The Yablanski House was built in 1906-1907 to the designs of Austro-Hungarian architect Friedrich Grünanger on the order of the wealthy financier and former mayor of Sofia Dimitar Yablanski. The exterior decoration was the work of the royal decorator of the Bulgarian Royal Family, Andreas Greis. Architecturally, the house was designed in the Baroque style with some Renaissance elements, with the interior stucco done in the Rococo style. The house's architecture draws heavily from an earlier work of Grünanger's, the Royal Palace in Sofia. Notably, the architect's home in Salzburg, where he later moved and subsequently died, is almost identical to the Yablanski House.
Image by Vassia Atanassova - Spiritia on Wikimedia under Creative Commons License.
Sight description based on wikipedia