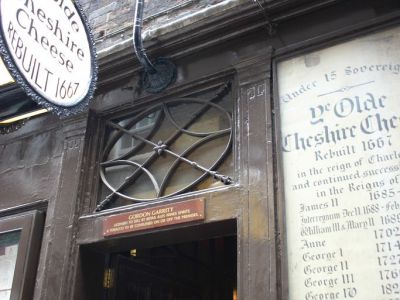 Quite possibly London's most iconic public house, Ye Olde Cheshire Cheese has been around since the days of Pepys and Wren, and is known for its literary associations, having seen among its regulars, at some point, such luminaries as Samuel Johnson, G.K. Chesterton, Mark Twain, George Orwell and Charles Dickens. Established in 1538, this is one of London’s oldest pubs, rebuilt shortly after the Great Fire of 1666. Certain parts of its lower cellars are even older.

The building was previously home to a monastery, and as such has a dizzying array of chambers, cellars and tunnels underneath. The small portion of the pub above ground consists of a wood-panelled dining room and a small bar, which usually has sawdust sprinkled on the floor. Located on Fleet Street, London’s former historic home of Britain’s major newspapers, ‘the Cheese’ has long been a popular haunt of weary hacks seeking sustenance.

Charles Dickens had been known to frequent this place, and it is alluded to in his "A Tale of Two Cities": following Charles Darnay’s acquittal on charges of high treason, Sydney Carton invites him to dine, "drawing his arm through his own" Carton leads him to Fleet Street "up a covered way, into a tavern … where Charles Darnay was soon recruiting his strength with a good plain dinner and good wine".

Presently owned by Sam Smith’s Old Brewery, this pub is an unmissable opportunity to soak in the watering-hole atmosphere of yesteryear’s London, walking in the footsteps of a few literary greats (and many lesser drunks).