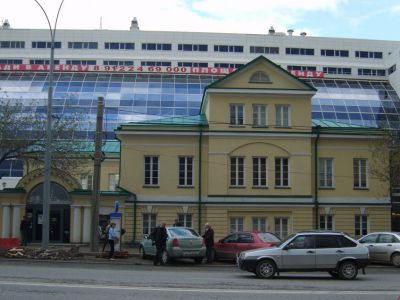 The Yekaterinburg History Museum was founded in 1992 through the reorganization of the House of Sverdlov, which has been around since 1940. The museum is located in a structure that was built in 1820 by Postmaster G. Layvashevsky. In 1837 an additional wing was added by mining engineer A. G. Kachka. Over the years it has served as a hotel, a nobleman's mansion and an apartment house. In the late 19th and early 20th centuries, the building housed the famous private library of S. A. Tichotsky. From 2004 to 2005, the building was renovated and greatly expanded. In an interactive exhibit at the museum, you can stroll through the streets of old Yekaterinburg, view the city from outer space, and descend underground to discover the wealth of mineral resources hidden there.

Want to visit this sight? Check out these Self-Guided Walking Tours in Yekaterinburg. Alternatively, you can download the mobile app "GPSmyCity: Walks in 1K+ Cities" from iTunes App Store or Google Play. The app turns your mobile device to a personal tour guide and it works offline, so no data plan is needed when traveling abroad.