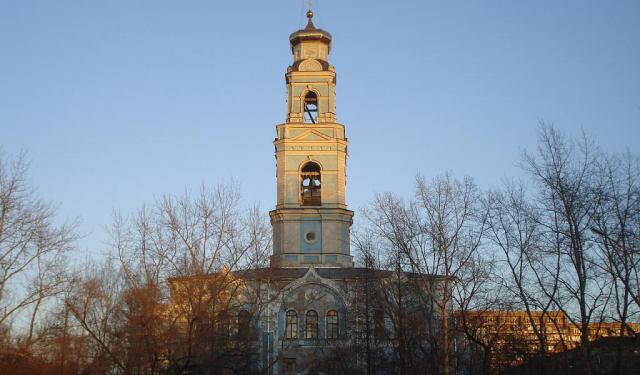 Yekaterinburg is a beautiful city with a rich religious history. Many churches managed to survive the wrath of the Soviet Union's anti-religious campaigns, and some have been renovated so they are more splendid than ever before. Take this tour to discover the striking architectural beauty of Yekaterinburg's churches and cathedrals.
Image Courtesy of Wikimedia and Порфирий.
How it works: Download the app "GPSmyCity: Walks in 1K+ Cities" from iTunes App Store or Google Play to your mobile phone or tablet. The app turns your mobile device into a personal tour guide and its built-in GPS navigation functions guide you from one tour stop to next. The app works offline, so no data plan is needed when traveling abroad.

1) Church of Ascension (must see)

This temple, built in honor of the Lord's Ascension, is one of the oldest Orthodox churches in Yekaterinburg. The temple was founded in May 1770 and was consecrated on September 19th of the same year. Originally the church was a small wooden structure. By 1789, however, the church building had fallen into disrepair, and, at the request of the parishioners, it was decided to build a two-story stone church. The ground floor was dedicated to the Virgin Mary and the top floor to the Lord's Ascension. Throughout the 19th century, the temple was repeatedly reinforced and expanded. In 1834, the clergy and parishioners decided to attach two chapels on the southern side and two chapels on the northern side of the temple and to add a new porch. In 1926 the church was closed. It subsequently served as a school and later as a museum. On February 15, 1991, during the Feast of the Purification, the liturgy was once again served.
Image Courtesy of Wikimedia and Porphiryj.
2

2) Church of All Saints (must see)

The Church of All Saints is a Russian Orthodox church, built from 2000 to 2003 on the site where the former Emperor Nicholas II of Russia and several members of his family and household were executed following the Bolshevik Revolution. The church commemorates the Romanovs, and its name is identical to that of the Ipatiev Monastery in Kostroma, where the Romanovs ascended the Russian throne. The complex includes two churches, a belfry, a patriarchal annex and a museum dedicated to the imperial family. It covers a total of 29,700 square feet. The main church was consecrated by patriarchs from all over Russia on June 16, 2003, 85 years after the execution of the Tsar and his family.
Image Courtesy of Wikimedia and Vladimir Udilov.
Sight description based on Wikipedia.
3

The Catholic parish in Yekaterinburg was founded in 1876 and included more than 1,000 parishioners. In 1884 the stone Church of St. Anne was built. After the 1917 revolution, the reverend was shot and the temple ruined. The building served at different times during the Soviet period as a library, a kindergarten and a bus station. In the early 1960s, the temple building was demolished. Rebuilding of the Catholic Church in Russia began in the early 1990s after the breakup of the Soviet Union. Permission was granted to the Catholic parish to build a temple at almost the exact same location as the site of the historic church. The church was consecrated by the Apostolic Administrator of Western Siberia, Bishop Joseph Werth on July 30, 2000.
Image Courtesy of Wikimedia and Voroh.
4

The three-domed Holy Trinity Cathedral was built in 1818 in the classical style. The original building was intended as a prayer house for Old Believers. The authorities, however, didn't grant permission, so until 1838 the temple remained inoperative. In 1838, J. M. Ryazanov and some of his supporters joined the Orthodox faith and the temple was officially sanctioned. The north chapel, consecrated on October 12, 1839, was erected in the name of St. John Chrysostom. The south chapel, built in the name of Nicholas, was consecrated on October 13, 1849. The main temple, which honors the Holy Trinity, was consecrated 2 1/2 years later on May 13, 1852.
Image Courtesy of Wikimedia and Falshivomonetchik.
5

The Yekaterinburg Synagogue, led by the Chief Rabbi of Yekaterinburg and the Sverdlovsk region, Zelig Ashkenazi, is located in a four-story building. Construction on the Community Center and Synagogue began in late June 2002 on the former site of a historic synagogue. There are more than 15,000 Jews registered at the community center, who participate in various religious, social, cultural and musical activities. Weddings, adulthood ceremonies, circumcisions, seminars and Torah readings are held at the synagogue.
Image Courtesy of Wikimedia and Falshivomonetchik.
6

Alexander Nevsky Cathedral, an active Orthodox church in Yekaterinburg, is located in the Novo-Tikhvin Monastery. The three-domed, stone church was granted cathedral status by decree of the Synod. It was built in the classical style by architect M. P. Malakhov in 1848. The main church, consecrated on September 21, 1852, was erected in the name of Grand Duke Alexander Nevsky. The left aisle, built in the name of Nicholas, was consecrated on June 8, 1853. Less than a year later, on May 23, 1854, the right aisle was consecrated in the name of Christ's resurrection. A small bell was installed in the chapel for summoning purposes.
Image Courtesy of Wikimedia and Vladislav Falshivomonetchik.