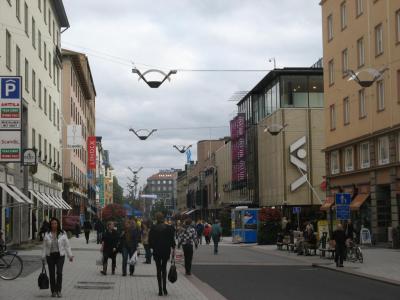 University Street is a street of about one mile in length that has a significant historical and cultural meaning in Turku. It runs between Kutomonkatu and Koulukatu streets.

As it exists today, University Street was designed by German architect Carl Ludvig Engel. It was first known as Russian Church Street after the Church of the Holy Martyr Empress Alexandra or Turku Orthodox Church. It was renamed in 1924 after the University of Turku began holding classes in the Hotel Phoenix.

A favorite tourist street has a section, about 400 meters long, between Aurakatu and Humalistonkatu streets, which turned into a pedestrian-only street in 2001. This safety measure allows tourists to walk unencumbered by traffic as they view the numerous historic buildings, such as the City Hall, the Hospits Betel Hotel, and the Atrium apartment building. The latter two were designed by Erik Bryggman, a well-known Finnish architect.

Numerous works of art are found throughout University Street. The bronze sculpture Europe donated to the City of Turku by Dutch artist Jits Bakker was inspired by Greek mythology. There is a steel sculpture called “Barcarola” designed by artist Ukri Merikanto. Another sculpture is the Lucky Horse by Russian-Finnish sculptor Rafael Saifulin. Many believe happiness comes to anyone who touches this statue.
Image Courtesy of Wikimedia and Användare.