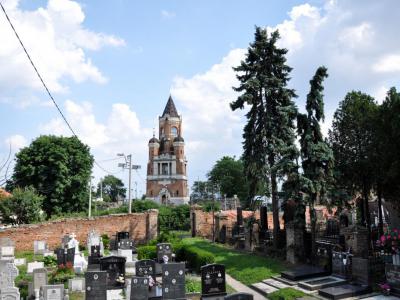 Zemun Cemetery is a public cemetery situated in Zemun on the Gardoš Hill. It is bounded by Cara Dušana Street, Nade Dimić Street, Sibinjanin Janka Street and Grobljanska Street, as well as with the staircase towards the Branka Radičevića Square, thus making the northwest boundary of the Old Core of Zemun. The cemetery is proclaimed the cultural monument.

Zemun cemetery on the Gardoš is located on the wooded plateau above the old part of the town and the Danube bank. It was established for the Catholic population, after the Turkish authorities had been expelled from Zemun and the town was incorporated into the Austrian Empire (1717). By the end of the 18th century the old Orthodox graveyard was moved to the same plateau. Both cemeteries are today at the same place, including the Jewish which was established in that location after 1739. By the middle of the 20th century the cemetery had filled up the present area and the authorities planned to open a new graveyard. However, that idea was realized after the Second World War and that new graveyard now serves a larger part of Belgrade.

The use of the old cemetery has been continued, although the idea was to bury there only those people whose families owned burial places there. The problem is still acute, particularly because a great number of tombs where the eminent persons were buried and numerous memorials of historic and artistic value have to be preserved.

In the Orthodox of the cemetery there are: the protected endowment church of the St. Demetrious, of the merchant family Petrović-Hariš (1876),the chapel of Spirta family (around 1911), The monument to the fallen and dead Serbian soldiers 1914–1918 (1928), the important graves of the former Greek and Tzintzari colony, graves of Russian refugees (since 1920), of the first pilots of Yugoslav passenger planes, businessmen, philanthropists, priests, scientists, writers, artists and others, with a large number of sculptures on them, the works of the eminent sculptors.

The Catholic cemetery keeps: a chapel from 1763 with several memorial plaques on its façade, a stylized chapel from 1909 of the Treščik family of pharmacists, a memorial to the warriors 1914–1918, a Neo–Gothic crucifixion in metal INRI, the graveyard of the nuns who worked in hospitals (since 1887) and schools (since 1928), memorial tombstones of merchant families.

The Jewish cemetery, one of the oldest in Serbia, has been the burial place since the arrival of Jews in the Austrian Zemun (1739) till the present time. The stone memorials have characteristic shapes, from votive plates to modern and representative, such as the tombstone to businessman Gabriel Polgar (1915)
Image Courtesy of Wikimedia and János Korom Dr..
Sight description based on Wikipedia.

The most beautiful park in Belgrade, Kalemegdan Park, or simply Kalemegdan, is also the largest park and the most important cultural and historical complex in the city. The actual park occupies a smaller portion, in the southern corner, of another, grander monument – the Belgrade Fortress (which is some two millennia older).

The fortress itself, often erroneously referred to, even by the...  view more

Belgrade has been a city of strategic importance for millennia with its location at the confluence of the Sava and Danube rivers. In fact, it is one of the oldest continually inhabited cities on the planet.

Nomadic tribes inhabited the area as far back as 20,000 to 50,000 years ago. Some of these may have been Neanderthals rather than modern humans. By the sixth century BC, the Vinca culture...  view more