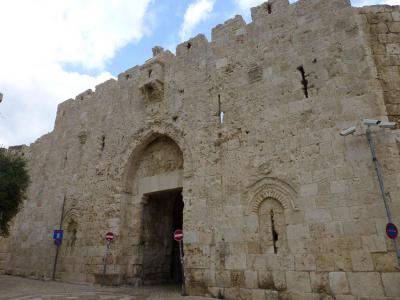 One of the eight gates built into the walls of the Old City, the Zion Gate – also called David's Gate – leads directly into the Armenian and Jewish Quarters, and if the legends are true about the famous Jewish king being buried here, then the name fits well.

Built by Suleiman the Magnificent's engineers circa 1540, it allowed direct access from the city to the holy sites on Mt Zion. In the 19th century, the area close to the gate became famous as a gathering place of lepers.

In 1948, during the Arab-Israeli War, this territory saw severe fighting when Israeli soldiers were desperate to breach the walls to relieve the Jewish Quarter under siege by Palestinian Arab forces. A testament to that event is the gate's exterior terribly pockmarked with bullet holes. A short distance to the west reveals conspicuous damage to the base of the wall where soldiers attempted to blast their way through with explosives.

When the last of the British troops left Jerusalem on May 13, 1948, the then president of the Old City's Jewish community, Mordechai Weingarten was presented with a key to the gate.

The Zion Gate retained its angular features designed to prevent invaders from entering – but you can come in the opposite direction and 'invade' the Old City 24 hours a day.

Tip:
The walls along here are especially nice and make for some fine photos in the afternoon sun.
Image Courtesy of Flickr and Paul Arps.