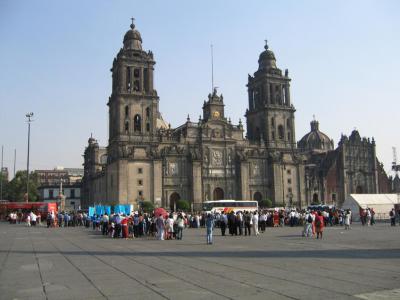 One of the world's largest public squares, Plaza de la Constitución, also known as Zócalo, was one of the city's main market areas from the days of Tenochtitlán (circa 14th century), in addition to being a place of ritual and celebration. In the 1860s, Emperor Maximilian I banned merchants and created a Parisian-style park, with tree-lined walkways and benches.

Later on, following the Mexican Revolution, the plaza was cleared of all its trees, grass, and ornamentation. A giant Mexican flag (ceremoniously lowered every evening at 6pm), now has pride of place in the center of the plaza, and in the heat of the day you can see crowds of people taking shelter in the flagpole's shade. Concerts, performance art, large assemblies, and, every December, a massive ice-skating rink, are other things to watch for.

Take a moment to feel the energy and history of this grand plaza, then proceed to exploring the blocks surrounding it – dense with impressive architecture, fascinating museums, and some of the best traditional restaurants in the city (El Cardenal), as well as many must-see landmarks, including the pre-Colombian ruins of the Templo Mayor, the National Museum of Art, and the Casa de los Azulejos (or "House of Tiles").

Why You Should Visit:
No trip to Mexico City would be complete without a wander around this amazing array of diversity/eclecticism. In the Zócalo and its surroundings, one can appreciate the Mexican history written on the walls of each surrounding building, can enjoy good cuisine, and can witness an entertainment event of national significance.

Tip:
There is not much shade in this square and the area really traps in the heat, so consider opting for a cooler part of the day for maximum enjoyment. Alternatively, go up to the Hotel Gran Ciudad de México's terrace for a great photo, or have lunch at Balcón del Zócalo, a rooftop restaurant in the Zócalo Central Hotel, which has gorgeous views of the cathedral and plaza.
Image by Ray_LAC on Flickr under Creative Commons License.