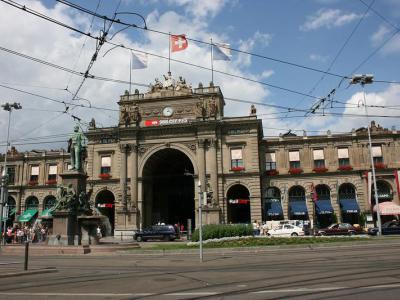 Called Zurich HB for short, the central railway station is the largest in Switzerland. The city's central location in the continent has historically made it a railway hub. It currently serves over 2,000 trains per day, making it one of the busiest in the entire world.

The station is built near the old town part of Zurich, called the Altstadt, at the confluence of the Limmat and Sihl Rivers. The Sihl passes into a tunnel that runs through the station. Zurich HB is built on two levels, with ground level and below-ground level train platforms. The two levels are tied together via the ShopVille shopping mall.

The city's first rail station was built on this site in 1847, but several significant expansions and redesigns have occurred since then. It was originally the end of the Swiss Northern Railway, which linked to Baden. As more and more rail lines connected into Zurich, a new, larger station to accommodate all of the traffic was built in 1871.

The main entrance arches face the Bahnhofstrasse, with a monument to railway pioneer Alfred Escher in front. The building is neo-Renaissance with richly decorated atriums, restaurants, and lobbies. Various features of the station have been modernized over time, including the electrification of all rail lines in the early 1900s and computerized signaling control in the 1960s.
Image Courtesy of Flickr and Robert Scarth.