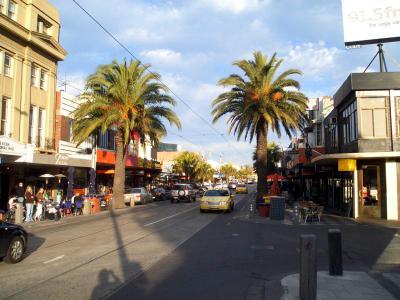 Melbourne is well known as Australia’s gastronomic capital, and one of the best loved dining precincts of the city is at Acland Street. The street is particularly well known for its cakes, sweets and bakeries, so make sure you have packed your sweet tooth on a visit here. Many of the patisseries, delicatessens, restaurants and cafes have been here for decades, before café culture was cool and back when St. Kilda was considered a has-been of a suburb. Monarch Cakes is the oldest patisserie on the street having notched up more than a century serving sweets and cakes to customers, with some of the items on sale making use of 100 year old recipes.

Today, just a block back from St. Kilda Beach, elderly continental European immigrants mix with backpackers, the hip set and moms and dads pushing prams. Acland Street was one of the very first streets in St. Kilda to be surveyed and was named after Sir Thomas Acland, who had owned the schooner Lady of St. Kilda between 1834 and 1840. It is close to other St. Kilda landmarks such as the Palais Theatre and Luna Park. The Sunday market on the Esplanade nearby makes Acland Street a hugely popular place to while away the hours on a lazy weekend morning.
Image by VirtualSteve on Wikimedia under Creative Commons License.