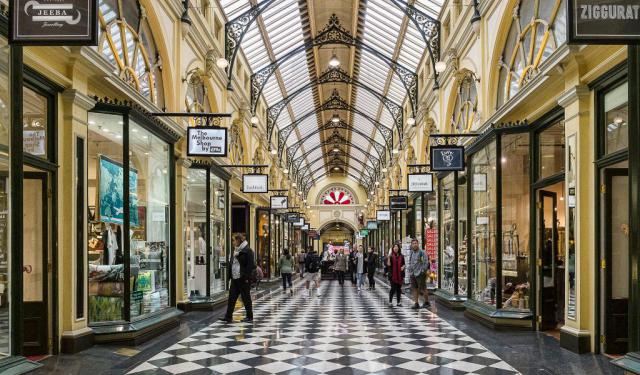 With over 40 laneways and arcades in Melbourne, one can easily traverse a good part of the city's Central Business District through them, without even setting foot on a street. Many of these laneways date back to the Victorian era and are famous for their shops, cafes, bars and boutiques – all with their own distinctive character and charm. To find your way around the city awash with cute laneways and shopping arcades, and to discover their best – follow this self-guided walk!
Image Courtesy of Flickr and Marc Dalmulder.
How it works: Download the app "GPSmyCity: Walks in 1K+ Cities" from iTunes App Store or Google Play to your mobile phone or tablet. The app turns your mobile device into a personal tour guide and its built-in GPS navigation functions guide you from one tour stop to next. The app works offline, so no data plan is needed when traveling abroad.

On the corner of Flinders Lane and Swanston Street, you'll find the historic Cathedral Arcade on the bottom floor of the Nicholas Building. There are a few shops and cafes, but the real attraction is the beautiful building itself and its architectural details. The leadlight archway and central domes were built in 1925. It's listed on the Victorian Heritage Register for its amazing art deco architecture and details.

The Nicholas Building was designed by Harry Norris and is one of the landmark buildings in Melbourne. It was finished in 1926 at the height of the art deco movement. The style of the building is often referred to as Commercial Palazzo or Chicago School. There are many classic elements in the terracotta facade, including giant ionic and Doric columns. Most of the building's tenants have traditionally been in creative industries, like fashion designers, commercial artists, and architects. You can access the building from inside the Cathedral Arcade. If you go on an Open Studio day, you will get a behind-the-scenes look at the artist's studios in the building.

Running between Flinders Street and Flinders Lane, this spot feels a little like Paris. This short, narrow laneway is made from cobbled stone and is pedestrian-only. You can find many cafes for coffee or wine or gift shops with goods from local artists here. If you're looking for a spot to dine alfresco on a beautiful summer afternoon, Degraves is the place to go. Degraves is often mistaken with Centre Place, another laneway nearby.

Many taller buildings on Degraves have been redeveloped into loft-style apartments, which gives the area a vibrant feel. You're sure to see street performers, street art, and graffiti; all are common here, and all add to the atmosphere.

The spot is named for Charles and William Degraves, pioneers and merchants from Hobart. They set up a flour mill in the area in 1849, and William was involved in local politics for many years.

Degraves connects the bustling Flinders Street Station to the shopping districts north of it, so it's quite busy. Campbell Arcade, which is sometimes called the Degraves Underpass, runs under Flinders Street to make the passage easier. There you'll find the Platform Artists Group who frequently displays artwork there.

Are you looking for great food, shopping, and maybe some street art? Centre Place is the spot for you. It's a cramped alleyway that will remind you of Harry Potter's annual trips to Diagon Alley. The blue cobblestone street is lined with boutiques and coffee shops. It's famous for its coffee shops and bars, as well as for its street art and graffiti.

Centre Place is located on the pedestrian thoroughfare that runs from Flinders Street Station to the Collins Street shopping district. Along the route, walkers will pass through the Campbell Arcade, Degraves Street, Centre Place, and the Centreway Arcade.

Centre Place was revitalized in the 1980s to attract more restaurants and businesses. Today it's a popular spot right in the middle of the Melbourne Central Business District (CBD).
Image Courtesy of Flickr and Brian Giesen.
4

Block Arcade is, without a doubt, the swankiest and most beautiful stretch of Melbourne. It was opened in 1892 and features an over-the-top French Renaissance architecture that makes the spot memorable. It's full of tall arches, cornices, and lots of decorative tiles. The arcade is full of boutiques and tea rooms and was once the prime shopping district off of Collins Street.

The arcade is L-shaped, with a large domed rotunda on the corner. Entrances are located on Elizabeth Street and Collins Street. The Collins Street entrance is opposite the even older Royal Arcade.

The name comes from the fashionable practice of "doing the block." In the late 1800s, the city's elite would dress in their best and stroll Collins Street and the arcades. It was the spot in Melbourne to "see and be seen."

The Block Arcade is a popular tourist attraction since it boasts the city's finest Victorian architecture. Walking the arcade is a trip back in time. It's the perfect place to stroll, window shop, and maybe have a bite to eat. The arcade's entrances are six-story tall facades that are some of the best examples of the Mannerist style of Victorian architecture in the city. The arcade is listed on the Victorian Heritage Register.

If you want to live the Victorian way, you must take tea at the Hopetoun Tea Rooms. First opened in 1894, they were completely redecorated in 1976 in Victorian style. Still to this day, the rooms give you the feeling that they are intended for high society. This isn't your ordinary cup of tea!

You may also want to check out the Royal Arcade, right across from the Collins Street entrance of the Block Arcade. Also, Block Court is adjacent. It has an elaborate Art Deco interior. It's no longer an arcade with shopfronts but is worth checking out regardless.
Image Courtesy of Flickr and a.canvas.of.light.
5

You might see the Howey Place arcade referred to as Cole's Place in some older guides. It starts on Little Collins Street and is a narrow and short laneway between Swanston and Elizabeth Streets. From the back, it connects to the Capitol Arcade on Swanston Street.

Edward William Cole created the arcade in 1896 when he covered this little street with a glass canopy to attract tenants. Some of the original shops included Cole's bookstore, a print shop, and a toy store.

Henry Howey, for whom the street is currently named, bought this parcel of land in 1837 for a whopping 128 Pounds Sterling. The Howey House, a 1930s art deco building, sat here but was demolished in the 1980s to build the Sportsgirl Centre.
Image Courtesy of Flickr and Scootie.
6

The Royal Arcade is glamorous and memorable, and in many ways like the Block Arcade. It's the oldest arcade in Melbourne, built in 1870, and is on the Victorian Heritage Register. You can enter the arcade from either Bourke, Elizabeth, or Little Collins Streets. The arcade has been a city landmark since its creation. But over the years, shops had altered the appearance, and numerous architectural features were lost. In the early 2000s, a major refurbishment was completed that once again unified all of the shops to their 1894 appearance and restored many historic features.

There are boutiques, cafes, and vintage goods stores galore. You'll notice the statue of Gog and Magog at the Little Collins Street entrance. The seven-foot-tall statues have framed the giant Gaunt clock since 1892, their arms striking the chime for each hour. They are carved from pine and are like those found in Guildhall, London.

The mythical giants represent the conflict between the ancient Britons and the Trojans. Gog and Magog, sometimes called Corineus and Gogmagog, were captured by Trojans and forced to serve as porters. It is in this capacity that they stand in Guildhall and here at the Royal Arcade. The clock and the statues were added about twenty years after the arcade opened by Thomas Gaunt, a jeweler and clockmaker, who had a shop here.
Image Courtesy of Flickr and Michael Coghlan.
7

With restaurants, cafes, and bars that spill far out into the street, it seems that there is little room left to walk down Hardware Lane. This is the spot where the locals head after work each day, and you're sure to find your new favorite wine bar or dinner place here.

Some describe Hardware Lane as an up-scale version of Degraves—there is less graffiti and street art and more focus on higher-end dining options. The red-bricked lane runs between Little Bourke and Lonsdale Streets, and vehicles are banned for the afternoons and evenings.
Image Courtesy of Flickr and Ian Cochrane.
8

Tattersalls Lane is full of unique and crazy finds, and the only way to discover all that's here is to spend a late evening wandering around. The laneway is a transition from the Central Business District (CBD) and Chinatown, so as you might expect, there are many Asian influences here. The lane was named for the Tattersalls Hotel and Club operated here during Melbourne's early days.

Among the many attractions include an all-you-can-eat Indian restaurant and the Shanghai Dumpling House. Xialong Kan serves hot pots of all different kinds. Section 8 is a local institution—it's a shipping container turned grunge hangout. This "permanent pop-up" bar is complete with party lights and wood pallets for seating. Upstairs you'll find Ferdydurke, a fun bar with amazing cocktails and a fantastic atmosphere. Besides the food and bars, Tattersalls is one of the city's best street art destinations. The walls are covered with art of all types.
Image Courtesy of Flickr and Alpha.