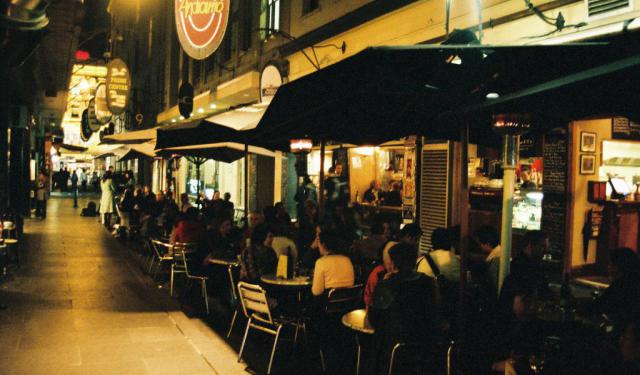 Relatively small a city compared to the likes of NYC or London, Melbourne is quite big in terms of food – fit to stand tall among these and other grand international destinations. The influence of multiple waves of immigration from Europe and Southeast Asia has rendered the local culinary scene insanely varied and opulent. To give your taste buds a due treat and to eat to your heart's content while in Melbourne, take this self-guided walking tour!
Image Courtesy of Flickr and BMan_au.
How it works: Download the app "GPSmyCity: Walks in 1K+ Cities" from iTunes App Store or Google Play to your mobile phone or tablet. The app turns your mobile device into a personal tour guide and its built-in GPS navigation functions guide you from one tour stop to next. The app works offline, so no data plan is needed when traveling abroad.

The Vic Market, or the Queen Vic as it's sometimes called, is the last major market left in Melbourne's Central Business District (CBD). It is the largest open-air market in the Southern Hemisphere, and it has been in operation since 1878.

In the city's early days, there were several different markets spread around the CBD. The Western Market was the first official fruit and vegetable market, starting in 1841. It was so popular that the Eastern Market was started in the 1840s, and that one became even more popular. The Queen Vic started as a group of buildings and smaller markets in the area of the Old Melbourne Cemetery. This cemetery was closed in 1854 and is the final resting place for many of the area's early settlers, including Melbourne founder John Bateman.

The market continued to grow in size due to overcrowding at the Eastern and Western Markets. In 1877, the original A-F sheds of the Queen Vic were constructed. Shops were built along Elizabeth Street, as well as the well-known Meat and Fish facade.

The Queen Victoria Market is one of Melbourne's biggest tourist draws. It operates every day except Mondays and Wednesdays, but a night market is held on summer Wednesday evenings. You'll find meat and poultry, seafood, fruits and vegetables, and many special delicacies. You'll also see lots of live music, bars, and entertainment options. There are also artists and clothing stores, jewelry makers, and homemade arts and crafts.

The market is home to over 600 small businesses, and it's a great way to connect with local artists. There's no better place to find authentic souvenirs, lively banter, fresh food, or just a great cup of coffee.

In particular, the Night Market is a multicultural event with street foods from all over the world, festival bars, and live entertainment.

Many of the original buildings are intact, including the retail row houses along Elizabeth and Victoria Streets built in the late 1800s. The oldest building is the Meat Hall, built in 1869.

Often raved about are the assorted delicatessen meats and cheeses sold in the section closer to the city end of the market. The selection and quality of goods rival anything you'll find anywhere else in the city.

There are many repetitive booths, but keep an eye out for exotic finds—especially in the fruits and vegetable sections.

There are sweets galore, including a doughnut truck that you shouldn't miss. There's also a fantastic bakery located in the Dairy Produce Hall, with French pastries and baguettes—perfect for tea time.

Some vendors try to sell out each day, so the prices get lower the later in the day you visit!


Image Courtesy of Wikimedia and Crisco 1492.
2

Melbourne Central is a shopping center, but it's also a lot more than a shopping center. Over two city blocks long, it houses over 300 retailers of all stripes, from famous international brands to Australian originals. The glass cone is a city landmark. It was designed in the 1980s by Japanese designer Kisho Kurokawa.

In its center lies the Coops Shot Tower, a bullet manufacturing facility from 1889. The juxtaposition of the red-brick Victorian building surrounded by the ultra-modern glass cone epitomizes Melbourne Central. A giant Marionette watch hangs over the square and building, and the Australian anthem "Waltzing Matilda" is played on the hour.

The entire complex lies atop the City Loop Melbourne Central train station, making connections easy to anywhere in the city.

Melbourne Central has a little bit of everything for everybody. But foodies will especially rejoice in the many dining options within the center. Pretty much every type of cuisine is represented, and there are plenty of bars and snacks to keep you busy all day long.
Image Courtesy of Wikimedia and Wpcpey.
3

Tattersalls Lane is full of unique and crazy finds, and the only way to discover all that's here is to spend a late evening wandering around. The laneway is a transition from the Central Business District (CBD) and Chinatown, so as you might expect, there are many Asian influences here. The lane was named for the Tattersalls Hotel and Club operated here during Melbourne's early days.

Among the many attractions include an all-you-can-eat Indian restaurant and the Shanghai Dumpling House. Xialong Kan serves hot pots of all different kinds. Section 8 is a local institution—it's a shipping container turned grunge hangout. This "permanent pop-up" bar is complete with party lights and wood pallets for seating. Upstairs you'll find Ferdydurke, a fun bar with amazing cocktails and a fantastic atmosphere. Besides the food and bars, Tattersalls is one of the city's best street art destinations. The walls are covered with art of all types.
Image Courtesy of Flickr and Alpha.
4

This arcade between Swanston and Russell Streets has more than 30 retail shops ranging from fashion to cuisine. There's a cinema, too.

MidCity Arcade is right in the heart of Chinatown on Bourke Street, so as you might expect, there's plenty of authentic Asian cuisine options here. Pick your pleasure—sushi, ramen, noodles, dumplings, or bubble tea. Japanese, Chinese, and many more are ethnicities and cuisines are represented.
Image Courtesy of Wikimedia and Nick-D.
5

One of the original east to west roads in town, Little Bourke Street is home to Melbourne's Chinatown, several department stores, and many boutiques.

Chinatown is centered on Little Bourke Street's eastern end, and it features many laneways and arcades. Like other "Chinatowns" all over the world, this was an important area for Chinese immigrants in Australia when they arrived beginning in the 1850s.

You'll still find many shops and restaurants here, but you'll see cuisines from China, Thailand, Japan, Malaysia, Vietnam, India, and Korea all represented. There are annual festivals, like Lunar New Year, that are worth checking out. But even if you visit on a quiet day, the architecture and culture here is a fascinating fusion. Many buildings are Victorian with elaborate Chinese motifs.

If you'd like to learn more about the Australian Chinese population, don't miss the Museum of Chinese Australian History, located on Cohen Place. Another great place to explore is the MidCity Arcade, a covered laneway full of Asian fusion shops, foods, and street art. On Cohen Street, look for the Facing Heaven Archway, a replica of a Ming Dynasty arch with imperial lions guarding it.
Image Courtesy of Wikimedia and Alex Proimos.
6

Running between Flinders Street and Flinders Lane, this spot feels a little like Paris. This short, narrow laneway is made from cobbled stone and is pedestrian-only. You can find many cafes for coffee or wine or gift shops with goods from local artists here. If you're looking for a spot to dine alfresco on a beautiful summer afternoon, Degraves is the place to go. Degraves is often mistaken with Centre Place, another laneway nearby.

Many taller buildings on Degraves have been redeveloped into loft-style apartments, which gives the area a vibrant feel. You're sure to see street performers, street art, and graffiti; all are common here, and all add to the atmosphere.

The spot is named for Charles and William Degraves, pioneers and merchants from Hobart. They set up a flour mill in the area in 1849, and William was involved in local politics for many years.

Degraves connects the bustling Flinders Street Station to the shopping districts north of it, so it's quite busy. Campbell Arcade, which is sometimes called the Degraves Underpass, runs under Flinders Street to make the passage easier. There you'll find the Platform Artists Group who frequently displays artwork there.
Image Courtesy of Flickr and Alpha.