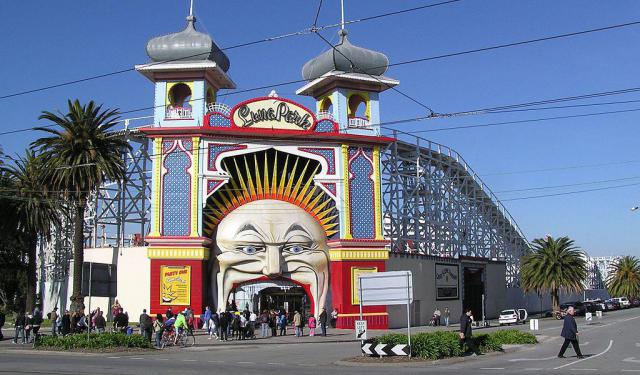 St. Kilda district of Melbourne is situated along a fantastic beach of the Pacific Ocean. It is a cosmopolitan suburb near Port Phillip Bay. Its most popular attractions are situated not far from the beach. This self-guided tour will lead you through St. Kilda's main attractions.
Image Courtesy of Wikimedia and Donaldytong.
How it works: Download the app "GPSmyCity: Walks in 1K+ Cities" from iTunes App Store or Google Play to your mobile phone or tablet. The app turns your mobile device into a personal tour guide and its built-in GPS navigation functions guide you from one tour stop to next. The app works offline, so no data plan is needed when traveling abroad.

St Kilda Town Hall is a grand, classically styled city hall. The first stage, never completed, was built as the municipal offices and public hall for the former City of St Kilda in 1890. Many additions, internal alterations, and changes in appearance were made in the early and mid 20th century, while serving as the municipal and social heart of St Kilda.

A devastating fire in 1991 seriously affected the art collection and burnt out the hall itself, and was followed by a prize winning refurbishment and further extension. After Council amalgamations in 1994, it became the base for the larger City of Port Phillip, and further extensions and renovations have occurred. The hall within remains popular for numerous social events, meetings and performances, a role it has served for over 120 years.

Image Courtesy of Wikimedia and jjron.
Sight description based on Wikipedia.
2

Melbourne during the 19th century was a city flush with wealth from one of the most lucrative gold rushes worldwide. The prosperity of the age is reflected in some of the impressive mansions that can still be seen around the city. Eildon Mansion is one such residence - built in 1850 and originally known as Barham House, it was extended in 1871 with new wings added. The home was built only a few short years after Melbourne was founded and this makes it one of the city’s oldest private residences.

St. Kilda was at the time, an exclusive seaside suburb where the wealthy built their summer homes and Eildon Mansion was built for one of Victoria’s wealthiest landowners, John Lang Currie, for his retirement. When Mrs Currie died, the home was sold and around 1930 it became a guest house. Despite many decades as a guest house and backpacker’s hostel, the interior has been well maintained and much of the original design and fittings can still be seen. Features include marble mantelpieces, a cellar, servants’ quarters, romantic bay windows and ornate plastering. The Alliance Française purchased the residence in 2006 and although there are no formal tours, you can visit for a look through the beautiful old home.

Melbourne is well known as Australia’s gastronomic capital, and one of the best loved dining precincts of the city is at Acland Street. The street is particularly well known for its cakes, sweets and bakeries, so make sure you have packed your sweet tooth on a visit here. Many of the patisseries, delicatessens, restaurants and cafes have been here for decades, before café culture was cool and back when St. Kilda was considered a has-been of a suburb. Monarch Cakes is the oldest patisserie on the street having notched up more than a century serving sweets and cakes to customers, with some of the items on sale making use of 100 year old recipes.

Today, just a block back from St. Kilda Beach, elderly continental European immigrants mix with backpackers, the hip set and moms and dads pushing prams. Acland Street was one of the very first streets in St. Kilda to be surveyed and was named after Sir Thomas Acland, who had owned the schooner Lady of St. Kilda between 1834 and 1840. It is close to other St. Kilda landmarks such as the Palais Theatre and Luna Park. The Sunday market on the Esplanade nearby makes Acland Street a hugely popular place to while away the hours on a lazy weekend morning.

The art deco Palais Theatre is a much loved St. Kilda landmark and one of Australia’s largest seated theatres. Walter Burley Griffin was originally commissioned to design and built the Palais at St. Kilda, but when his construction was engulfed in fire just before it was completed, Griffin moved on and Henry E. White was engaged. A bigger, bolder design was offered by white and the result was the grand edifice that remains today. The Palais was built as a dual purpose theatre to show films as well as to serve as a concert hall. When built it was one of “the” places to go out, offering a double movie feature, plus entertainment from bands, singers, dancers and other entertainers on the bill. On July 3rd, 1929, it was one of the very first Australian theatres to screen “talkies”.

Until the 1950s it was mostly used as a cinema, but following that, world-class performers such as the Bolshoi Ballet, the Rolling Stones, Tom Jones, and Bob Hope have all tread the boards. The lavish construction boasts a Moorish interior and exterior, with a chief feature of the façade being the twin-domed towers. In recognition of the significant place that the Palais Theatre holds in Australian theatrical history, there are regular theatre tours held.

Why You Should Visit:
Absolutely gorgeous after all the renovations have been completed.
Inside and out, the architecture and attention to detail are jaw-dropping.
Comfortable, clean, and always room to move even in a sold-out show.

Tip:
Be warned – if you get seating in the front upper area you must remain seated the whole show.

The St Kilda Sea Baths is a pool, spa, food and entertainment complex on St Kilda Beach. Numerous 'seabath' structures have come and gone on the St Kilda foreshore, the last built in a Spanish- Moorish style in 1931, which was demolished in the 1990s and replaced by the present structure, partly reconstructing the 1931 baths.
Image Courtesy of Wikimedia and Donaldytong.
Sight description based on Wikipedia.
6

The St. Kilda Pavilion is one of the Melbourne seaside suburbs’ main landmarks and much loved reminder of the genteel history of the area. The pavilion itself sits out on the end of the pier, which dates back to 1853. It was originally known as Parer’s Pavilion when it was built in 1904 and it served tea and refreshments to beach goers and those coming to take the health giving sea air. Then, in 2003, disaster struck and the pavilion fell victim to an arson attack. Locals and politicians alike got behind the cause to restore the kiosk and it was rebuilt according to the original plans. An extension to the deck and the café at the back of the construction has ensured that the pavilion is able to meet the 21st century customer demands while maintaining its historical aspect.

Inside the pavilion, the kiosk is open from 8am until dusk each day and the Little Blue Restaurant provides an excellent menu and range of local wines alongside one of Melbourne’s best views. While strolling along the pier and visiting the pavilion, make sure to take the time to read the interactive panels that tell the visitor about the pier’s long and fascinating history.
Image Courtesy of Wikimedia and Dietmar Rabich.