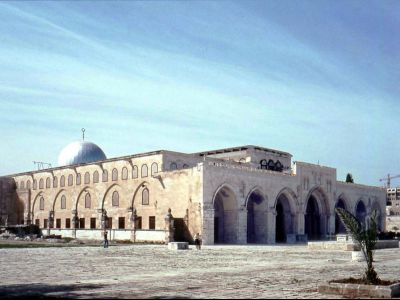 Translated as "the Distant Mosque", al-Aqsa is the third holiest site in Islam and the holiest mosque in Jerusalem. It stands on the Temple Mount, also known in Arabic as Hara mesh-Sharif, which means “Noble Sanctuary”. Quite possibly, it sits on the site of the very first mosque built in Jerusalem in 638. Over the course of the millennium, al-Aqsa has been destroyed twice by earthquakes, damaged multiple times by natural and man-made causes, and rebuilt several times.

While most of the additions to the building made by the Crusaders, Fatimids, Mamluks, and Ayyubids have not survived to our day, some of them are still visible. In 1951, king Abdullah of Jordan was assassinated in the southern wing of the Mosque. Bullet holes in the stonework and a small memorial at the site remind of that tragedy.

The southern portion of al-Aqsa is known primarily for the Mihrab of Zacharia (Crusader chapel), which is a niche facing in the direction of Mecca, lavishly decorated by Saladin. Its lovely mosaics around the central aisle arch and the dome have stood the test of time, much as the stunning rose window and the Double Gate (original entrance to the Temple Mount). The pillars have been reconstructed, but the columns are all originals built by king Herod.

Although most of the mosque interior is from the 20th century, it is not less beautiful and includes seven aisles, more than 120 stained-glass windows, 45 columns supporting the building, of which 33 are made of white marble. The lower part of the mosque – al-Aqsa Qadima (ancient al-Aqsa) – is a restricted area, usually closed to the public.

Tip:
Non-Muslims are not allowed in without a guide. If so, you can still enjoy the outside architecture for a few minutes, as part of a visit to the Dome of the Rock.
Image Courtesy of Wikimedia and Barbara Kabel.