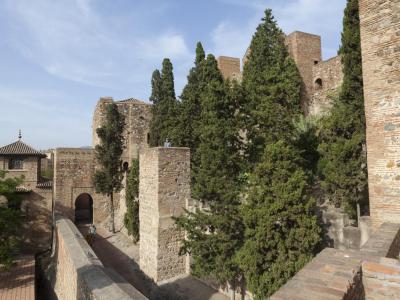 The Malaga Fortress is built on a hill near the center of Malaga. As a military installation, it is ideally situated. It overlooks both the city below and the sea. It is enclosed by two massive walls of stone. It was also attached to the city ramparts and it has strategically located defensive towers.

The outer fortress is accessed by the Vault Gate. The gate was designed to double back on itself, making it difficult for intruders to enter. These days, however, visitors may use the elevator.

A pathway leads up past gardens and ornate fountains through the Gate of Columns or Tower of Christ and then turns abruptly once again with intruders in mind. The inner fortress can be reached by the Gate of the Granada Quarters, which defends the western edge of the palace. The Tower of Tribute takes care of the eastern edge.

Inside this second defensive wall is the palace itself and houses which were built on three patios in the 11th, 13th and 14th centuries. Among them are the Quarters of Granada. The Quarters would serve as residences of governors and as Royal Apartments.

The Malaga Fortress is located at the foot the Gibralfaro hill. It is connected to the Arab defenses by a walled-in passageway called Coracha. The Roman Theatre and the customs building share a space. Here is the opportunity to compare Roman, Renaissance and Arab construction together.

Arab historians claim the palace was built by 1063 by order of King Badis of the Berber Taifa of Granada. Building materials were transported to the site for general construction and the columns while the old Roman theatre supplied materials for capitals and other like uses.

Ferdinand and Isabella seized Malaga in 1487 by one of the longest sieges of the Reconquest. They entered the fortress and raised their royal standard at the Tower of Tribute. That was the day Spain became Spain.