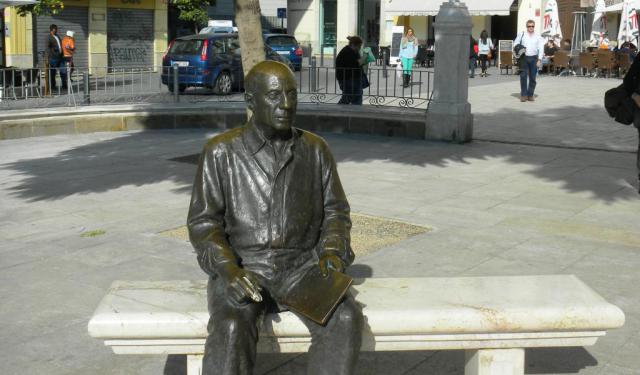 Image by Llecco on Wikimedia under Creative Commons License.

The best place to start a walk through Picasso’s Malaga is Casa Natal at Plaza de la Merced, 15. Today this boyhood home of Picasso houses his Foundation and Birthplace Museum containing furnishing and personal effects of the Picasso family, as well as a notable art collection featuring works by Picasso and over 200 other artists, including his contemporaries. Just a few steps away, in the adjacent square, you will find the life-size bronze statue of Picasso – Estatua de Pablo Ruiz Picasso – seated on a marble bench.

The next stop on the trip may be the Church of Santiago Apostol, where Pablo Picasso was baptized. You will also want to visit the larger Picasso Museum at Calle San Agustín, 8 – the live realization of the artist’s desire to have his work displayed in the native town. At the end of this street is another church, of San Agustín, the former municipal archive and museum of Malaga, where Pablo's father served as the curator and had a studio; Picasso had vivid memories of this place.

The last stop on the tour is the bullring, La Malagueta. Picasso's father often brought him here, as a child, to see the leading bullfighters of the day. It was here that Picasso developed a lifelong passion for bullfighting.

If you wish to see the places that once shaped the genius of Pablo Picasso in his home town, take this self-guided tour.
How it works: Download the app "GPSmyCity: Walks in 1K+ Cities" from iTunes App Store or Google Play to your mobile phone or tablet. The app turns your mobile device into a personal tour guide and its built-in GPS navigation functions guide you from one tour stop to next. The app works offline, so no data plan is needed when traveling abroad.

It was inevitable that Malaga should produce Picasso. The first ten years of his life there nourished his talent. He was born at number 15 Plaza de la Merced (Merced Square), a building now known as the Casa Natal. Elements of Malaga's rich history surround the house. Everyday life in Malaga provided recurrent themes of his art.

The building was erected in 1861. Picasso's father, Jose Ruiz Blasco rented the first floor of the house from 1880 to 1883. In 1983 it was declared a Historic-Artistic Monument of National Interest. In 1998 the building was taken over by the Picasso Foundation and officially reopened by the King and Queen of Spain.

On the ground floor is an exhibition hall showing items from Picasso's early family life and works by both Picasso and his father. The first floor holds works on exhibit by the artist. The third floor contains the library and Research Center and an extensive archive of material regarding the artist and his oeuvre.

Along with Picasso's prints, ceramics and graphic art pieces there are 3,500 works by 200 other artists. It is a vast selection representing Miro, Christo, Bacon, Brossa, Ernst and others including Malaga artists from the 1950s to the present.

Tip:
Admission is free every Sunday from 4pm.


Image by Ewa GRYCZKO on Flickr under Creative Commons License.
2

The sculpture Portrait of the Painter Pablo Picasso is a bronze statue depicting the artist seated on a marble bench, with a notebook and a pencil in hands. Almost life-size (the sculptured figure is a bit bigger than Picasso's real stature), this monument was created by Francisco López Hernández and inaugurated on December 5, 2008.

It is located just a few steps away from Picasso's birthplace, Casa Natal, at 15 Plaza de la Merced, which now a museum and a home to the headquarters of the Picasso Foundation.

Ever since its installation, the statue of Pablo has been involved in numerous performances held in the square, such as the White Night, running since 2009, during which, depending on the theme, it is decorated in one way or another.

In April 2013, a group of vandals attempted to steal the statue. However, because of its heavy weight, they could not take it very far and left it on a nearby bench.

Presently, the bronze Picasso is back in his place, leaving sufficient space on the bench to sit next to him and have a little chitchat, or take a memorable photo.
Image by Miwipedia on Wikimedia under Creative Commons License.
3

According to parish records, Pablo Picasso was baptized at the church of Santiago Apostol in Malaga on November 10, 1881. The name given was "Pablo Diego Jose Francisco de Paula Juan Nepomuceno Maria de los Remedios de la Santisima Trinidad." A lot of names for so small a package then but the name "Picasso" is more than enough now.

The church is situated on the Calle Granada on top of an ancient mosque. It was founded in 1490 and it is the oldest church in Malaga. The facade and tower are in the Mudejar style. The interior is Gothic-Mudejar. In 2009 a restoration of the facade was completed. Four windows were uncovered which had been walled up in the 12th century.

The church embodies three cultural styles, Gothic, Baroque and Mudejar. The Gothic can be seen in the chapel and the arch to the central nave. Mudejar is apparent in the tower, recalling a minaret. The Baroque additions of the 18th century masked the primitive elements with a barrel vault and plaster decorations.
Image by Zarateman on Wikimedia under Creative Commons License.
4

Pablo Picasso's father, Jose Ruiz, was the curator of the city museum of Malaga. The museum was not often open to the public because of limited budgets. Part of Jose's compensation was the exclusive use of a room in the building as an art studio. Pablo did his first sketches in that room, working with his father.

The Buenavista Palace that housed the museum was built in the 16th century. It was built for one Diego de Cazalla. Under the Palace were the remains of a Nasrid palace which have partially survived.

The 20th century conversion of the dilapidated palace into a museum was a challenging project led by architect Richard Gluckman. The palace alone was not large enough to accommodate all the functions of a proper museum. It was necessary to acquire two neighboring houses that had fallen into disrepair.

Christine Picasso, widow of the artist's eldest son Paulo Ruiz-Picasso, and her son Bernard have donated 155 of Picasso's works to the Museum. The collection includes early studies in Cubism and his later re-doing of Old Masters. Additional pieces are on loan. There are documents, photos and a library with nearly a thousand titles devoted to Picasso.

Tip:
It is possible to get in for free on a Sunday at noon but be aware the queues can be huge and the wait is long.

The Convent of Saint Augustin is located on the Calle San Augustin in Malaga. This is Picasso's neighborhood. The convent is next to the Palacio de Buenavista and the Picasso Museum. It was built on land purchased by the Augustinian Friars in 1575. The street at that time was called Calle de los Caballeros.

In 1810 the convent was damaged by the French invasion and it did not resume activities until 1812. This was at the height of Napoleon's busy time. During the years that followed the convent was a city hall, then a blood hospital, then a seminary. After all that shuffling, it became an Augustinian school in 1918.

The convent was familiar to Picasso. His father was curator of paintings that were exhibited in the town hall. The school allowed his father the use of a workshop as a studio where he taught art. The teacher recalled the workshop was nothing special. "A little dirtier...than the one I had at home; but it was quiet..."
Image by Simon on Wikimedia under Creative Commons License.
6

La Malagueta, the bullring of Malaga, can be found in the center of the city, near the Paseo de Reding. The structure of the arena is in the style of neomudejar in the shape of a hexadecagon (16 sides). The ring measures 169 feet in diameter. It has holding pens, stables, dressing rooms, and most importantly, a first aid post.

La Malagueta hosts events during the fighting season, including two fights in Holy Week. One of the fights is named Corrida Picassiana for Pablo Picasso. When Picasso was a child, his father often brought him here to watch bullfights. It was here Picasso developed a lifelong passion for bullfighting.

The contest between man and bull appears often in Picasso's sketches and paintings. In a 1925 painting of his son Paul, the child was dressed in the traditional costume of a bullfighter with the red cape in one hand. In the background, one can see the subtle outline of a bullring arena.

The bullring has a season from April to September. It is a short walk from Malagueta beach in the eastern part of the old town. The best view of the ring is from the Castle of Gibralfaro, above the Malaga Fortress.
Image by Olaf Tausch on Wikimedia under Creative Commons License.