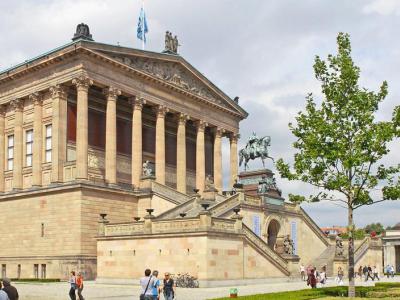 The Alte Nationalgalerie houses one of the most important collections of 19th-century painting in Germany, including Neoclassical, Romantic, Biedermeier, Impressionist and early Modernist artwork, part of the Berlin National Gallery. Situated on Museum Island, a UNESCO-designated World Heritage Site, the building – first opened in 1876 – impresses with its palatial layout, reinforced by the equestrian statue of Friedrich Wilhelm at the main entrance.

The main highlight here is Romanticism, with a very impressive collection of Friedrich whose "Monk by the Sea" is on display amongst other great works, but even more valuable is the context: many (mostly small) paintings of lesser-known artists, which together provide a good picture of the century. For those keen on Impressionism, one of the central rooms on the ground floor presents paintings of several key French painters, including some well-known pieces by Manet, Monet, Pissarro, or Renoir. There is, of course, German art in this genre as well, with a good representation of Max Liebermann. The rest is, if not world-class spectacular, then pretty high-level art at the least.

Why You Should Visit:
Good navigation and very nice space – open and you can get very close to the artwork.

Tip:
Be sure to use the free headsets here – you will learn a great deal about German painting.