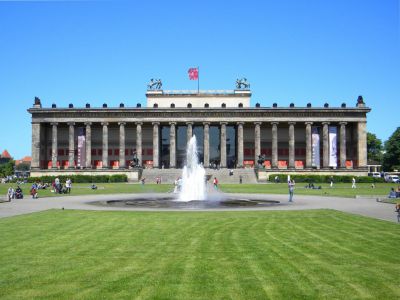 Built between 1823 and 1830 to house the Prussian Royal family's art collection, the Altes Museum (German for "Old Museum"), generally regarded as architect Karl Friedrich Schinkel's masterpiece, sits in a great location right next to the riverway with lots of photo-ops and people gathering on the front lawn to chill out.

Since it is a world-famous museum of antiquities, expectations are high. Starting with the Greeks, these expectations are met – archaic Greece is represented with major masterpieces, excellent vases, and good statues. Aside from statues of Greek deities exhibited in the central rotunda, the main items of interest would be the bronze Praying Boy, the Berlin Goddess, and sculptures of athletes (rendered as if they were in movement). The section on the Greek colonies in southern Italy displays their pottery which is somewhat larger and less restrained vases and kraters of mainland Greece.

Etruscans are on part of the 1st floor and mainly relate to grave goods and reliefs – a nice insight into this mysterious race. The better part of this floor is the Roman section, especially the carvings on the sarcophagi and large statues. There is also an extensive collection of portraits from the Imperial age, including busts of Caesar and Cleopatra.

The collection itself is peerlessly kept, with plenty of available information on both pieces and the period they refer to.

Tip:
Occasional temporary exhibits are held on the 2nd floor.