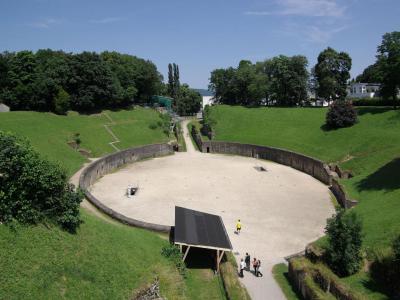 The Trier Amphitheater was erected around the 2nd century AD during the rule of Antoninus Pius. Dug into the side of a hill, the amphitheater is thought to have held up to 20,000 spectators at a time, which makes it the 10th largest Roman arena preserved intact to this day.

The amphitheater was incorporated into the city's fortification system, the defensive wall, serving partially as a gate. Preceding the entrance were two narrow passages, called vomitoria, which led through the embankments to the spectator stands. Contrary to what one may think, a vomitorium wasn’t a place for vomiting but an anteroom in which the crowds gathered prior to being “vomited” into the stands or back out to go home.

In times of crisis, hot oil and wild animals were unleashed from the amphitheater upon those who dared to attack the city.

The primary purpose of the venue, however, was entertainment: animal shows and gladiatorial fights. Both animals and fighters were kept in the cellar beneath the arena. The amphitheater was renovated in 293 AD, when Constantius Chlorus moved to Trier, which is thought to be the timeframe in which the cellar was added. A small burial ground, containing the graves of 46 people, was discovered in 1996.

Today, the amphitheater is used as a performance venue, hosting antiquity festivals and staged gladiator shows. It was designated as a UNESCO World Heritage Site in 1986.
Image Courtesy of Wikimedia and Berthold Werner.