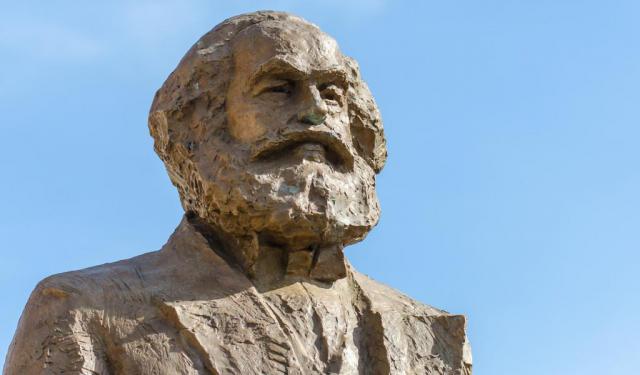 In The Footsteps of Karl Marx (Self Guided), Trier

Here, the father of socialism and one of the most important philosophers of the 19th century, who, as an adult, managed to change the course of the world's history, had spent the first 17 years of his life. For someone who had later changed cities like socks, this stint happened to be the second longest in any one place (in London Marx spent twice as long). Still, Trier was the city that had most shaped Marx's story.

Karl was born on May 5, 1818 in an 18th-century gabled house on Brückenstrasse, which is now the Karl Marx's House museum and the most important attraction for those keen on his legacy. The museum houses the famous bust of Marx sculpted by his great-grandson, the rare first edition of Das Kapital, Marx's seminal work, and other relics.

When the boy was just over a year and a half old, the Marxes moved to a different location, the pink house – presently known as Karl Marx Childhood Home – on Simeonstrasse, which is nowadays the main pedestrian street of the city. The family lived here until 1835, when Karl finished school.

Symbolically, Marx's wife, Jenny von Westphalen, also from Trier, used to live not far from his birthplace, just a few blocks away – on Neustrasse.

On the 200th anniversary of Marx's birth, the Chinese government added to the list of Marx-themed attractions in Trier a 5.5-meter statue, a nod to his birth date: 5.5.1818.

If you wish to follow in the footsteps of Marx in his hometown, take this self-guided tour. Whilst walking, make sure not to miss a pair of traffic lights, at the end of Fleischstrasse, with a cheerful bearded figure glowing not only with the classic revolutionary red, but also in green...;)
Image Courtesy of Flickr and Max Gerlach.
How it works: Download the app "GPSmyCity: Walks in 1K+ Cities" from iTunes App Store or Google Play to your mobile phone or tablet. The app turns your mobile device into a personal tour guide and its built-in GPS navigation functions guide you from one tour stop to next. The app works offline, so no data plan is needed when traveling abroad.

Influential philosopher Karl Marx was born in this house in 1818. He would become the father of Marxism, laying the groundwork for communism and socialism. The museum hosts exhibits about Karl Marx's life, works, and influence.

The house was originally built in 1727 and has been renovated many times over the years. The building has been dedicated to remembering Karl Marx since 1947. The exhibits were revamped in 2018 to celebrate the 200th anniversary of Karl Marx's birth. The exhibits include a Marx bust sculpted by Marx's great-grandson and a first edition print of the pivotal Das Kapital.

Visitors can explore Marx's origins, family life, career, and time in exile in London. The ground floor focuses on Marx's life and family. The top floor looks at his sociology, economics, journalism, and philosophy work. The final portion of the museum reviews Marx's influence on the labor movement and the influence Marx's ideas had on the world.

Visitors will find various historical documents, photographs, and Marx's favorite armchair on display. In addition to the exhibits, the house features a beautiful garden with several sculptures depicting Karl Marx.

The Residence of Jenny von Westphalen is located on New Street between Kapuzinergasse and Viehmarktstrasse. The pedestrian street is now home to numerous boutiques where visitors can find souvenirs to take back home. There are also a number of services, like banks and salons, as well as a few cafes on this street.

Jenny von Westphalen, political activist and the wife of Karl Marx, lived in Trier with her parents, two older half brothers and younger brother, Edgar. Jenny and Edgar became friends with Marx and his sister Sophia when they lived in this home. It was many years later before Jenny and Marx were engaged, when she was 22 and he was 18.

Jenny's mother Caroline Heubel lived in the home until her husband's death in 1842. Jenny and Marx were married the following year and moved to France.

The building is now marked with a plaque noting the space as the childhood home of Jenny von Westphalen.
Image Courtesy of Wikimedia and Unknown author.
3

The Jesuit Church is a Gothic church that was constructed in 1228. It was used as a monastery church of the Franciscan order through 1570. It was then used by the Jesuit order for the next 300 years.

The church is one of the oldest preserved Franciscan churches in the country. The inner courtyard has a crypt that contains the bones of Friedrich Spee, a Jesuit priest and professor in early 17th century, who was best known as a forceful opponent of witch hunting. Spee's writings helped bring an end to the witch hunting practice in Germany.

A portion of the college was eventually turned into the Friedrich-Wilhelm Grammar School. Karl Marx attended the school for five years, from 1830 to 1835. Marx received a grade point average of 2.4 in his final exam at school with 1 being the highest grade.

Today, the Jesuit Church is used as the Diocesan Theological Seminary. The courtyard is sometimes used for concerts and special events.

The grounds are open from 9 AM to 5 PM daily. Admission to explore the grounds is free, but there is a charge when concerts are taking place. Those hoping to see the crypt must receive a key at the gate, which is only staffed Monday through Friday.
Image Courtesy of Wikimedia and Stefan Kühn.
4

Französisches Casino, also known as the French Casino or Kasino Kornmarkt, is a classical building on Trier's Grain Market. It was built in 1825 by Johan Georg Wolff as a club house for the Trier Reading Society, founded in 1817. Members of the society included community leaders, the educated class and Prussian officers. Heinrich Marx, father of Karl Marx, was a prominent member of the Literary Casino Society.

It was at one of the Casino Society’s dancing balls where Karl Marx fell in love with the “Queen of the Ball”, Jenny von Westphalen. They were married in 1843 and moved to France the same year.

The building was heavily damaged during World War II in 1944. The only remaining components of the structure were the outer walls. It was rebuilt using the original design for its outer facade. The interior was fully remodeled, but an original spiral staircase was restored and put in place.

The building was restored after the World War II and served as a casino for the occupying French soldiers, which gave it its current name. It is now an event venue that serves as the location of cultural celebrations, parties, lectures, theatrical performances and concerts.
Image Courtesy of Wikimedia and Berthold Werner.
5

The home of the Marx family on Simeon Street 1070 was the center of Karl Marx 's life in Trier during his youth. Today a plaque commemorates the famous resident.

Karl Marx was born at what is now Brückenstraße 10, where his parents lived in rented accommodation. Known as the Karl Marx House, this birthplace now houses a permanent exhibition on the life and aftermath of Karl Marx.

On October 1, 1819, Heinrich Marx, Karl Marx's father, bought the small house in Simeon Street not far from the Black Gate for the price of 18,987 francs in installments and the family moved there from the Brückengasse.

The Karl Marx Childhood Home is located at the beginning of the city's promenade, which leads directly to the main market. In this house Sophia, Karl, Hermann, Henriette, Louise, Emilie and Caroline were baptized on August 26, 1824. His brother Eduard Marx died here on December 14, 1837. Karl Marx lived in this house until he graduated from high school in autumn 1835.

The Simeon Street has remained unchanged to this day, so the young Karl Marx walked along the same shopping street daily on his way to school.

Even in later years, the path of life often led the Karl Marx back to his childhood home. In 1841 and 1842, the house once again became the center of Marx's life. After successfully completing his doctorate in philosophy, he traveled from Berlin back to Trier in 1841. He lived in his parents' house for several months, visited his fiancé Jenny von Westphalen every day and pursued further studies here.
Image Courtesy of Wikimedia and Lucyinthesky80.
Sight description based on Wikipedia.
6

The bronze statue of Karl Marx stands in the center of Trier. The statue was given to the city by the Chinese government. It was created by sculptor Wu Weishan. The statue itself is about 14 feet in height, but looms at more than 16-feet tall upon its large plinth.

It is located in a pedestrian square on the backside of the city museum and the Trier tourism and information center. The square provides plenty of room for viewing the statue. Those visiting the statue can read about Marx with a nearby placard that details information about the statue and Marx himself.

The Karl Marx statue was not erected without controversy. When it was added to the city in 2018, there were numerous protests from those who decry the abuses brought about by communism. There were also many who stated a gift should not be accepted from China, a country that is known for human rights abuses.
Image Courtesy of Flickr and Max Gerlach.