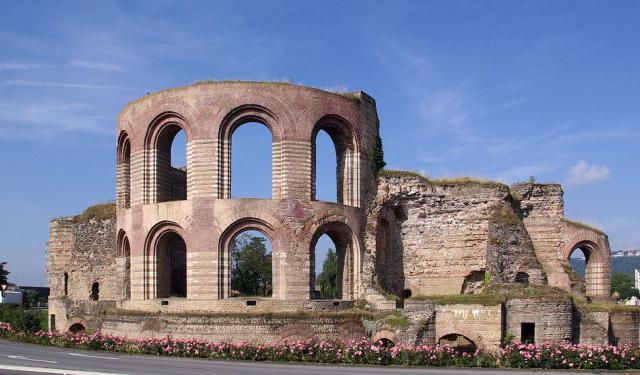 Founded in 15 BC by the Roman emperor Octavian Augustus, this oldest city in Germany is a home to the largest number of Roman ruins outside Rome. Many of these buildings, especially the one called Porta Nigra, are perfectly preserved and together form a UNESCO World Heritage Site. Dating to the 2nd century AD, “the Black Gate” was one of the four gates in the roughly rectangular city wall, and today is the real highlight of the Trier Roman ruins.

Other remnants from the glorious era, both pre-Christian and those built under Emperor Constantine I, are just as remarkable and include Aula Palatina (the Basilica of Constantine the Great), commissioned in the 4th century AD by the first Christian Roman ruler, and the Römerbrücke (Roman Bridge), the oldest bridge in Germany, erected in 152 AD.

Just as any other significant Roman city, Trier had public baths. Three of them have been excavated and can be viewed:

Thermen am Viehmarkt (Forum Baths) – currently encased in a glass box, date from the 3rd-4th centuries AD; in later years served as a source of construction materials, a Jewish cemetery, monastery garden, and a cattle market (viehmarkt);

Kaiserthermen (Imperial Roman Baths) – completed in the 4th century AD, when Trier was the capital of the entire western portion of the Roman Empire;

Another prominent monument of the Roman epoch is the Amphitheater, dating to the 1st century AD, with a seating capacity of 20,000.

If you find value in the ancient Roman monuments and sacred sites, you'll be interested in this self-guided tour. All of Trier's Roman ruins are within a walking distance of each other, so you can see them all at your leisure, in a single go, in the town center.
Image Courtesy of Berthold Werner.
How it works: Download the app "GPSmyCity: Walks in 1K+ Cities" from iTunes App Store or Google Play to your mobile phone or tablet. The app turns your mobile device into a personal tour guide and its built-in GPS navigation functions guide you from one tour stop to next. The app works offline, so no data plan is needed when traveling abroad.

Black Gate is an ancient Roman city gate and the largest Roman gate north of the Alps. It is part of Trier's UNESCO World Heritage Site.

The Black Gate name originated in the Middle Ages and refers to the darkened stone color. The Roman gate was built after 170 AD and used as a town entrance for centuries. The gate was built with 7200 massive sandstone blocks that weigh as much as six tons and are held in place by iron clamps. The construction of the gate was never completed for unknown reasons. Black Gate guarded Trier's northern entrance and was one of four city gates.

During the Middle Ages, the other three gates fell into disuse, and their stones were used for other building projects. However, the Black Gate had important historical value as revered Greek monk Simeon's home. Simeon was a religious hermit who sought sanctuary in the Black Gate during the 11h century. The Black Gate was then turned into two churches. Monks used the upper church, and the lower church was available to the public.

Napoleon Bonaparte dissolved the church in 1802. Bonaparte wanted to tear down the structure, but residents convinced him to save it and restore it to its Roman origins.

Visitors can see the remains of Roman columns leading up to the gate. Black Gate is open to visitors, and during the summer, an actor portraying a Roman army officer leads tours. Visitors can climb to the gate's top for commanding views of Trier.

The Basilica of Constantine is a Roman palace basilica that was originally built between AD 300 and AD 310. It currently houses the Church of Our Redeemer and is part of Trier's UNESCO World Heritage Site.

The Basilica of Constantine was originally part of a complex, not the stand-alone building it is today. The basilica was constructed in solid brick with black and white marble floors and an impressive floor and wall heating system.

The Basilica became a Protestant Church in 1856. It was rebuilt after being damaged during World War II. Restorers didn't replace the inner decorations, so visitors can see the brick walls from the inside.

The Basilica of Constantine is an impressively large building at 33 meters high (108 feet) and 67 meters long (220 feet). The basilica's windows create an optical illusion that makes the building look even bigger than it is.

Excavation work underneath the basilica has been preserved, and visitors can take a guided tour to view the underground Roman area. The basilica also hosts several inspirational concerts every year.
Image Courtesy of Wikimedia and Heinz L.Boerder.
3

The Forum Baths of Trier is a complex of baths dating from Roman times of about 100 CE. The ruins of these baths were uncovered in 1987 when an underground car park was being constructed.

Other relics discovered, along with the baths, were foundations of Roman houses and public buildings used for unknown purposes. It was discovered that these buildings were converted into public baths in the fourth century.

The baths are now encased in a glass building. While the exterior of the baths looks sleek and modern, the interior allows visitors to travel back in time to Roman occupation. Metal stairwells and elevators give tourists access to all levels of the baths.

The area is also regularly used for special events. The most popular is the Rhineland-Palatinate Chamber of Agriculture wine tasting held each January.

The Roman Baths are open 11 AM to 5 PM, Tuesday through Sunday.
Image Courtesy of Wikimedia and Raimond Spekking.
4

Römerbrücke, known in English as The Roman Bridge, is an ancient bridge that spans the Moselle from Karl Marx Street to the traffic circle at Eurener Street. It is the oldest bridge in Germany.

The origins of the Roman Bridge go back as far as 17 BC when a wooden bridge stood in this location. The bridge was made from wood so that it could be set on fire during war. Because of this practice, multiple wooden bridges were built.

A permanent bridge made of stone was erected in 144 CE. It was built from black basalt from the Eifel mountains. Though the upper portions of the bridge were updated in the 12th and 18th centuries, the nine bridge pillars that were erected in the 2nd century AD still stand today.

It was once thought that tossing a coin off of the bridge and into the river below would bring good luck. The bridge was named a UNESCO World Heritage site in 1986.
Image Courtesy of Wikimedia and Carole Raddato.
5

Barbarathermen, or the Barbara Baths, are a Roman bath complex. This large complex covers over 42,000 square meters, or roughly 10 acres, near the center of the city. It is the largest Roman bath complex north of the Alps.

The baths were built in the 2nd century and were used through the 4th century. They were then used as a castle, but torn down so that the materials could be repurposed for a Jesuit College that was constructed in 1610.

The ruins of the baths include the foundations and the subterranean tunnels. Only about one-third of the ruins have been unearthed thus far. The visitor's walkway displays reconstructions of the architecture as well as the course of a typical day at the baths.

The Barbara Baths were named a UNESCO World Heritage Site in 1986. They are open from 10 AM to 6 PM daily from April to September. Hours are shortened to 10 AM to 4 PM during the winter months. There is no entry fee to explore the Barbara Baths.
Image Courtesy of Wikimedia and Ben Bender.
6

The Imperial Roman Baths were constructed during Constantine I's reign in the fourth century. Trier's baths are the largest Roman baths outside of Rome. The original bathing structures were over 200 meters long (656 feet) and 100 meters wide (328 feet).

Constantine started building the baths as part of a city-wide building project. Trier was one of the Empire's most important cities and considered a "Second Rome." Roman Trier was home to between 75,000 and 100,000 people.

Bathing was an important part of Roman culture, and the baths were open to the public. The hot water pools reached 40 Celsius (104 Fahrenheit), and the complex had an underground tunnel system for staff. During the Middle Ages, the baths were turned into a castle. The baths have also been used as a city wall and a monastery.

Today's visitors can tour the baths and the underground passageways. The Imperial Roman Baths are part of Trier's UNESCO World Heritage Site.
Image Courtesy of Wikimedia and Zairon.
7

The Trier Amphitheater was erected around the 2nd century AD during the rule of Antoninus Pius. Dug into the side of a hill, the amphitheater is thought to have held up to 20,000 spectators at a time, which makes it the 10th largest Roman arena preserved intact to this day.

The amphitheater was incorporated into the city's fortification system, the defensive wall, serving partially as a gate. Preceding the entrance were two narrow passages, called vomitoria, which led through the embankments to the spectator stands. Contrary to what one may think, a vomitorium wasn’t a place for vomiting but an anteroom in which the crowds gathered prior to being “vomited” into the stands or back out to go home.

In times of crisis, hot oil and wild animals were unleashed from the amphitheater upon those who dared to attack the city.

The primary purpose of the venue, however, was entertainment: animal shows and gladiatorial fights. Both animals and fighters were kept in the cellar beneath the arena. The amphitheater was renovated in 293 AD, when Constantius Chlorus moved to Trier, which is thought to be the timeframe in which the cellar was added. A small burial ground, containing the graves of 46 people, was discovered in 1996.

Today, the amphitheater is used as a performance venue, hosting antiquity festivals and staged gladiator shows. It was designated as a UNESCO World Heritage Site in 1986.
Image Courtesy of Wikimedia and Berthold Werner.