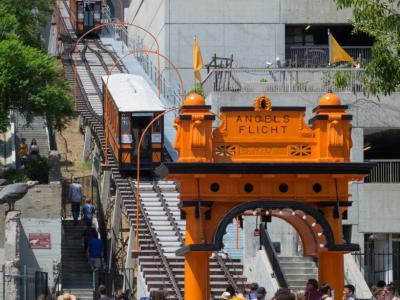 One of LA's most enduring (and beloved) landmarks, the whimsically-named Angels Flight bills itself as "the world's shortest railway" – and indeed, it is quick, lasting about a minute or so. San Francisco's cable cars are roughly from the same era, so this narrow gauge funicular (that is, a cable railway built on an inclined surface) will give you a fun, similar feeling – albeit, admittedly, of a shorter duration. Up and down the two carriages, endearingly named Sinai and Olivet, are almost on a continuous loop. Costing $1 each way, on the ascent journey one pays on alighting at the terminus. A true bargain for a piece of history.

Having opened on New Year's Eve, 1901, the funicular is a centenarian that has carried millions; in fact, it was estimated that by the 1950s, it had carried over a 100 million passengers! With its stately Victorian mansions, Bunker Hill was one of LA's very upmarket neighborhoods, and the area's elite residents apparently rode down on Angels Flight to shop for their groceries in Grand Central Market's open-air arcade. The well-heeled Bunker Hill residents paid a penny a ride in those days!

Apart from taking you up and downhill nice and easy, what Angel's Flight does best is put a silly smile on your face in thirty seconds ;-)