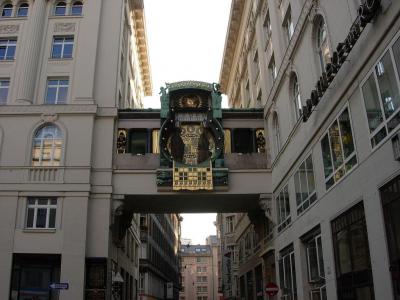 Named after the Anker Insurance Company, which financed it, this early 20th-century Art Nouveau masterpiece set atop the Uhrbrücke or "Clock Bridge" between two buildings, is the work of Franz von Matsch, a close associate of renowned Austrian artist Gustav Klimt.

People flock here at noon when the clock puts on a show, with twelve historical figures slowly stagger across the clock face. These include Marcus Aurelius (the Roman emperor who died in Vienna in AD 180), Empress Maria Theresa, Joseph Haydn, and other (details of who’s who are on a street-level plaque), each one accompanied by music from their era. The tunes, including works by Mozart and Wagner, were originally played by a mechanical organ containing an incredible 800 tubes, which managed to survive the WWII artillery fire, but was damaged to such an extent that it could not be repaired and was replaced by a ten-minute medley of digital sound reproduction.

It's not an overly big deal like the Astronomical Clock in Prague (which happens to be similarly fitted with twelve gilded figures and similarly built in green and gold colors), but it's fun to see, and you are not getting crushed by crowds of tourists the way you might in Prague.

Tip:
Another interesting monument to view at Hoher Markt is the attractive Baroque-style "Marriage Fountain" (Vermählungsbrunnen) that dates back to the mid 18th-century.
Image Courtesy of Wikimedia and Marcin Grochowski.