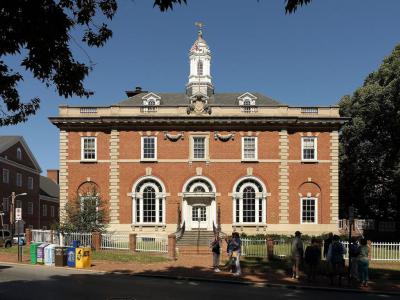 Among other impressive embellishments gracing the building are a classical stone cornice, a neo-Palladian doorway and windows, the beautiful Wren-style octagonal cupola with gilded dome crowned by the carved golden pineapple symbolizing hospitality, and weather-vane, as well as Venetian windows with stately curved arches, and stone laurels draping like bunting from the brick facade. The building's interior is equally impressive and is rich in woodwork, especially oak paneling.

The Annapolis Post Office has a long history. Many local residents started and ended their careers here. Decades ago, the office upstairs was occupied by the FBI. Over the years, the "Post Office" has undergone several phases of renovation so as to accommodate some modern amenities. Still, the original style remains visible and makes it one of the most recognizable and historically important properties in Annapolis, showing that, back in the day, the government cared enough about architecture. William Morgan of Columbia University in New York City described the building in his 1967 architectural review as “solid and superbly built [compared to] junk the government builds today.”