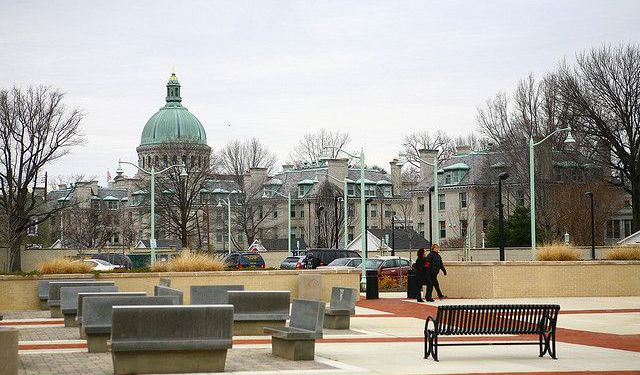 Image by "highlimitzz " on Flickr under Creative Commons License.

Established in 1845 under George Bancroft, the US Naval Academy is Annapolis' most prominent complex, situated right at the confluence of Severn River and Chesapeake Bay. The Academy's campus has on its territory some of the most beautiful structures in the city. Following this guide, you will find a variety of attractions, including the museum, outstanding buildings, some monuments, the observatory and the cemetery of the Naval Academy.
How it works: Download the app "GPSmyCity: Walks in 1K+ Cities" from iTunes App Store or Google Play to your mobile phone or tablet. The app turns your mobile device into a personal tour guide and its built-in GPS navigation functions guide you from one tour stop to next. The app works offline, so no data plan is needed when traveling abroad.

Bancroft Hall at the United States Naval Academy is the largest single dormitory in the world. Bancroft Hall, named after former Secretary of the Navy George Bancroft, is home for the entire brigade of 4,000 midshipmen, and contains some 1,700 rooms, 4.8 miles of corridors, and 33 acres of floor space.

All the basic facilities that midshipmen need for daily living are found in the hall.

Bancroft Hall was designed by Beaux-Arts architect Ernest Flagg and its central rotunda and first two wings were built in 1901–06. Over the intervening years it has been expanded to encompass eight wings of five stories each numbered 0-4. In addition to the midshipmen rooms, Bancroft Hall houses offices for the Commandant of Midshipmen, six battalion officers, six battalion chaplains, thirty company officers and their senior enlisted leaders, a barbershop, bank, travel office, a small restaurant known as "Steerage," textbook store, general store, laundromat, uniform store, cobbler shop, the USNA Band, the USNA branch of the United States Postal Service, a gymnasium, spaces for extracurricular activities, and full medical & dental clinics as well as small optometry and orthopedics clinics. There are rooms in Bancroft dedicated to each Academy graduate Medal of Honor recipient in the Navy or Marine Corps.

Image by Preservation Maryland on Flickr under Creative Commons License.
Sight description based on wikipedia
2

Temple Bell is a replica of the original bell that United States Commodore Matthew Perry brought back following his 1855 year mission to Japan. Temple Bell is located to the left of Bancroft's Hall entrance and displays a plaque with the inscription "Replica of the Temple Bell presented in 1854 to Commodore M. C. Perry, USN by the Regent of the Lew Chew Islands (Okinawa)". The bell rang in ceremonies for each of the Navy's victories in Army–Navy Game, an annual football game between the teams of USMA and USNA.
Image by Brian D. Bell on Wikimedia under Creative Commons License.
3

The Naval Academy Chapel was designed by Ernest Flagg. In 1940, the Chapel underwent remodeling which doubled the seating capacity to 2,500, to accommodate a larger brigade of midshipmen. In 1995, the Chapel was featured on a U.S. Postal Service postage stamp, honoring the Academy's 150th anniversary. The United States Naval Academy Chapel boasts a 268-rank organ controlled by one of the largest drawknob consoles in the world. Beneath the main chapel is the crypt of John Paul Jones. There is also a small chapel of St. Andrew which has been used for smaller weddings.

Image by Fr James Bradley on Flickr under Creative Commons License.
Sight description based on wikipedia
4

The Herndon Monument is actually a tall grey obelisk on the territory of the US Naval Academy. The monument was erected in honor of Captain William Lewis Herndon. The monument is popular as it is home to the famous ceremony "plebes-no-more", whereby the academy's first year students all try to climb the greased monument together and replace a "dixie-cup hat" on the monument's top with a combination cover.
Image by Joe Bengoechea--Joebengo on Wikimedia under Creative Commons License.
5

The Peggy Stewart House, also known as the Rutland-Jenifer-Stone House, is a Georgian style house in Annapolis, Maryland. Built between 1761 and 1764 by Thomas Rutland as a rental property, it was owned at various times by Thomas Stone and Daniel of St. Thomas Jenifer. In October 1774 it was owned by Anthony Stewart, owner of the ship Peggy Stewart. It was listed in the National Register of Historic Places in 1973 for its associations with the burning of Anthony Stewart's ship, Peggy Stewart, as well as for its architectural significance as a mid- to late 18th century Georgian mansion. Furthermore, the dwelling was recognized as a National Historic Landmark for its associations with Jenifer and Stone, and for the thematic representation of politics and diplomacy (1763 - 1783) during the American Revolution
Image by Pubdog on Wikimedia under Creative Commons License.
Sight description based on wikipedia
6

The United States Naval Academy Museum is the Annapolis maritime museum, located in Preble Hall. The museum was founded in 1845 and occupies about 12,000 square feet. It consists of four galleries, its collections depicting American naval history. There are thousands of 2D and 3D artworks such as uniforms, weapons, books, flags and photographs. The most popular collections are the Naval Academy Art Collection with its 1200 paintings, The Rogers Ship Model Collection and the Malcolm Storer Naval Medals Collection.

Mahan Hall is one of the three halls of the academic complex of Mahan, Sampson and Maury Halls on the territory of the United States Naval Academy, built at the beginning of the 20th century. The hall features a beautiful Beaux-Arts style architecture with an outstanding clock tower. Mahan Hall was designed by Ernest Flagg and was home to a theater along with an old library, now transformed into a lounge located in the Hart Room. Mahan Hall was named after the United States Navy flag officer, Alfred Thayer Mahan.
Image by John T. Lowe on Wikimedia under Creative Commons License.
8

The Tripoli Monument is the oldest military monument in the United States. It honors heroes of the United States Navy from the First Barbary War (1801–1805): Master Commandant Richard Somers, Lieutenant James Caldwell, James Decatur (brother of Capt.Stephen Decatur), Henry Wadsworth, Joseph Israel, and John Sword Dorsey. It was carved in Livorno, Italy in 1806 and brought to the United States on board the famous 1797 frigate USS Constitution ("Old Ironsides"). From its original installation in the Washington Navy Yard at the new national capital of Washington, D.C. in 1808, it was later moved to the west front terrace of the United States Capitol facing the National Mall in 1831, and finally to the United States Naval Academy campus in Annapolis, Maryland in 1860.

The white marble sculpture consists of a thirty foot high column topped by an eagle and mounted on an elaborate base adorned with allegorical figures representing Glory, Fame, History, and Commerce. History, on the northwest corner, is represented by a seated female figure holding a book in her proper left hand and a pen made of bronze gilt in her proper right hand. She looks up and begins to record the event that she sees. Commerce, on the northeast corner, is represented by a male figure pointing to the column with his proper right hand and holding a caduceus in his proper left hand. Winged Victory stands beside the column, her proper right hand holding a laurel wreath over a sarcophagus and her proper left hand holding a bronze gilt palm branch. The column is adorned with two rows of antique "beaks of galleys" and two rows of antique anchors carved in relief. The sculpture rests on a square base constructed with blocks of stone and adorned with an urn on each corner.

The monument is made of Carrara marble with a sandstone base and measures 360 by 192 by 192 inches (9.1 m × 4.9 m × 4.9 m). It is also known as the U. S. Naval Monument, the Naval Monument, and the Peace Monument. The designer was Giovanni Charles Micali.
Image by Employees of the United States Naval Academy on Wikimedia under Creative Commons License.
Sight description based on wikipedia
9

Since its beginning the cemetery has become the final resting place for Medal of Honor recipients, Superintendents of the Naval Academy, midshipmen, and former employees of the Academy and hundreds more of the nation's veterans. The cemetery is also home to monuments that do not mark remains, but commemorate the heroism of individuals who gave their life in service to their country. The Jeannette Monument, erected in 1890, is the most notable such monument it was built in memory of the men who lost their lives in the Jeannette Arctic Expedition. In 1987, the Naval Academy constructed a columbarium adjacent to the cemetery on College Creek.
Image by Chris Lussier on Wikimedia under Creative Commons License.
Sight description based on wikipedia

In addition to the historic houses of Annapolis, the city is home to more great pieces of culture and history, such as the First Presbyterian Church and St. Mary's Parish, the fabulous Kunta Kinte-Alex Haley Memorial in the City Dock, etc. You will also be able to take a walk to the Eastport neighborhood to see the Maritime Museum and get familiar with the boating community of Annapolis.

Annapolis is an attractive city and its landmarks bustle with five parts red brick mansions, all of them under 2 1/2-storeys. You will also find splendid mansion interiors with accents on woodwork or other elements of the prevailing Georgian style. Take a walk through the great tale of little historic houses in Annapolis.