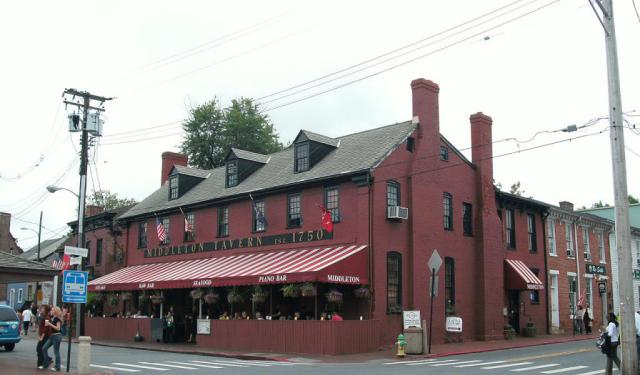 Best Pubs and Taverns in Annapolis (Self Guided), Annapolis

As Annapolis is the sailing capital of Maryland, the city enjoys numerous exciting places offering great beer and seafood till late at night. There are pubs, saloons and bars, the majority of them hosting live music nights, as well as different contests. This self guided tour introduces you to the best bars and pubs in Annapolis.
Image Courtesy of Wikimedia and AlbertHerring.
How it works: Download the app "GPSmyCity: Walks in 1K+ Cities" from iTunes App Store or Google Play to your mobile phone or tablet. The app turns your mobile device into a personal tour guide and its built-in GPS navigation functions guide you from one tour stop to next. The app works offline, so no data plan is needed when traveling abroad.

Galway Bay Irish Pub is a traditional Irish pub located on Maryland Avenue. The pub offers a variety of drinks such as Guinness and great food as well; they also have diet menus and gluten-free beers. This is not only a place to drink - it offers great jazz on Sundays, contests on Tuesdays and other live music events, as well as special events and promotions. Galway Bay Irish Pub also offers many surprises, as well as happy hours. The pub is open Mon–Thurs 11 am-12 am; Fri-Sat 11 am-1 am; Sun 10 am-11 pm.
Image Courtesy of Flickr and Edward Kimmel.
2

Located in Downtown’s City Dock, just a block from the United States Naval Academy, Middleton Tavern is a testament to both of these local story lines. Established in 1750 by Horatio Middleton, this is one of the oldest continuously operating taverns in America. It started off as an “inn for seafaring men”, providing base for Middleton’s Ferry Service which linked Annapolis to Maryland’s Eastern Shore, and thus served as the meeting site for many historic personalities.

Tench Tilghman took the ferry to deliver news of Cornwallis’ surrender in 1781, while Thomas Jefferson used it en route to Rock Hall in 1783, whereas George Washington took it on his way to…somewhere, too. After Middleton’s death, his son expanded the family business to include ship building and overseas trade. During that time, the tavern enjoyed some of its most sensational customers. Practically next door to the Maryland State House, members of the Continental Congress came to this joint after the ratification of the Treaty of Paris and the official end of the Revolutionary War in January 1784.

James Monroe, a friend of the elder Middleton, may have even visited the tavern in 1818 as a sitting president. The bar’s history throughout the rest of the 1800s is a little hazy, but in 1968, the current owner, Jerry Hardesty, bought and restored the property. In 1983, he expanded the restaurant to include the new Tavern and Oyster Bar.

Void of the surrounding gardens, which, back in the old days, stretched from Prince George Street to the water, Middleton’s front porch today provides some of the greatest people watching in town. Paired with some fresh regional seafood from the raw bar and a Category 3 Dark and Stormy, it creates recipe for a fantastic evening in Annapolis. The tavern's specialties include Maryland crab cakes, rockfish, oysters, and clams. Middleton’s Electric Lemonade (Smirnoff Citrus Vodka and Blue Curaçao mixed with the Tavern’s homemade lemonade) is a separate attraction.

Other than the great food and drink served with a slice of history, this 18th-century Georgian establishment also hosts some truly magnificent live music events: acoustic blues, piano, jazz and anything else to make you feel great. Their famous Piano Bar on Friday and Saturday nights are particularly not to be missed!


Image Courtesy of Wikimedia and Jyothis.
4

The Castlebay Irish Pub was established in 1998 and is owned by Vincent Quinlan, a native of Dublin, Ireland. Mr. Vincent Quinlan has reproduced a Dublin City pub in the core of downtown Annapolis. Their menu offers Irish food and local foods such as Cream of Crab Soup and Maryland Crab Cakes. They also claim to have the greatest beer in the city, namely Guinness. The pub is a great live music venue, and there is a nice variety of music played every day. Working hours are Monday to Sunday from 11 am to 2 am.
Image Courtesy of Flickr and Andy Lawless.
6

Founded in 1989, the Rams Head Tavern offers great drinks and food in a casual atmosphere. The tavern's menu is popular due to the variety of beer offered by the Fordham Brewery and the assortment of seafood. The Rams Head Tavern is considered one of the best places in Annapolis to spend your time enjoying a good quality beer and some of Annapolis' tasty specialties. The hours of operation are Monday to Saturday from 11 am to 2am and Sundays from 10am to 2am.
Image Courtesy of Flickr and mhahn1_98.
7

Stan and Joe's Saloon is a bar established in January 2007 and owned by two local bartenders. The place boasts good service, good food and lively atmosphere. They offer tasty seafood with a large variety of drinks. Stan and Joe's Saloon is an "old-school" saloon, offering live music at night and daily specials. The saloon has been voted as the best place for nightlife, best bartenders etc. Working hours: Monday-Saturday from 11 AM to 1:30 AM; Sundays from 10 AM to 2 AM.
Image Courtesy of Flickr and Marco Verch.