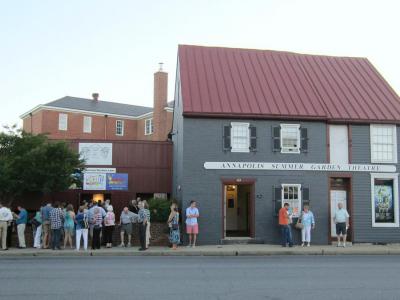 The Annapolis Summer Garden Theatre came into existence in 1966 with the first performance season outdoors behind the Carvel Hall Hotel, which encased the historic William Paca House & Gardens. A year earlier, “Olde Town” Annapolis was designated a Registered National Historic District, prompting the restoration of many of historic buildings therein. The brick and frame Old Shaw Blacksmith Shop building that houses the theater today is the only link to Annapolis’s life as a commercial seaport remaining on Compromise Street, and was first mentioned in the Annapolis archives in 1696!

Once the site of a colonial warehouse storing goods for a thriving transatlantic market in the first third of the 19th century, by 1960 the Shaw Blacksmith Shop had been abandoned and remained vacant after its previous owners, the Shaw family — respected blacksmiths, had moved their business to Parole. In 1967, work began to convert the property to an outdoor theater, which took imagination and a great deal of effort. Vacant for a number of years, the building was inhabited by more than a few critters, and truckloads of dirt, old horseshoe nails, and other debris had to be carted away.

Led by volunteers showcasing musicals on an outdoor stage during summer, the Longtime community theater lovingly maintained this historic property in its rustic, charming, challenging, intimate, and magical condition, effectively transforming it from an industrial facility to a popular cultural venue.

Starting circa 1983, and over the next 25 years, the property had undergone numerous modifications (largely with volunteer effort) set to improve safety and security against the ravages of time and damages from natural causes, such as 2003 Hurricane Isabel. Another leg of renovation took place in 2006, marking the theater's 40th anniversary. Today, the Old Shaw Blacksmith Shop building is a piece of historic beauty right in Annapolis's core.
Image by Lkwintherhansen on Wikimedia under Creative Commons License.