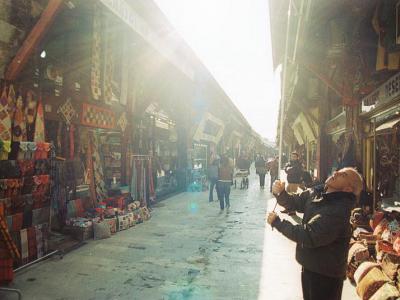 Arasta Bazaar is a well-known, albeit modest open-air market in the heart of Istanbul. Located on the north side of narrow Torun Street, behind the Blue Mosque, the bazaar was built in the 17th century with the idea to use rental revenues from its shops to subsidize the upkeep of the mosque. For many years later, the shops remained empty until the tourism boom of the late 1980s-90s prompted their restoration, making it one of Istanbul's most-visited tourist markets.

If you're tired of or simply don't have time for the Grand Bazaar but still need to buy authentic goods or souvenirs, Arasta Bazaar is a good alternative. Considerably smaller (just a fraction of the Grand Bazaar), cleaner, quieter and less crowded, the Arasta makes both shopping and sightseeing very convenient. Here you will find more than 70 stores selling carpets, kilims, jewelry, pottery, spices, teas, coffee, ceramics, textiles, handicrafts, souvenirs, tiles, scarves and apparel in abundance.

Prices may appear a bit higher than the Grand Bazaar, but still reasonable, and even more so after haggling. The place is quite relaxing to stroll through whilst being invited by dozens of accomplished salesmen speaking fluent English (and a half dozen other languages, too), with bottomless treasure troves of ironic humor and topical jokes, to have a look, take a seat, sip some Turkish coffee or tea and consider the purchase.

Whilst here, you can also visit the Great Palace Mosaic Museum underneath the bazaar. The mosaics found in the environs of the Arasta during excavation works in the 1930s proved that the territory once formed part of the Byzantine-era Great Palace complex.

Opening Times: Monday to Saturday 09:00-19:00. Some shops are open on Sundays as well.
Image by Dmitriy Fokeev on Flickr under Creative Commons License.