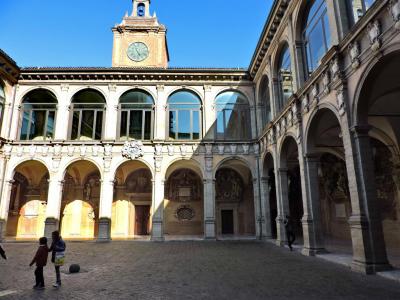 Archiginnasio of Bologna, Bologna (must see)

The Achiginnasio was commissioned by Cardinal Borromeo and completed in 1563. The Achiginnasio was designed to create a centralized university where students could study Legisti, or Law, and Artisti, or philosophy, mathematics, medicine, natural sciences, and physics. Previously, these disciplines were always housed in separate buildings.

The University moved to the Poggi Palace in 1803. Various primary schools used the building until 1838 when the Achiginnasio became the home of the Municipal Library.

The Municipal Library was originally created to store books collected when Napoleon ordered the closure of religious orders. The library has over 850,000 books and pamphlets, including about 15,000 handwritten and printed items from the 16th century.

The building was rebuilt after being damaged by World War II bombs in 1944.

The Archiginnasio has an imposing porch with 30 arches. Two stairways lead to the second floor, where university students attended classes. The upper floor has two wings, one wing was originally used by law students, and the one wing was used by the students of other disciplines.

Each wing has a great hall. One hall now houses a reading room. The other hall is known as "Stabat Mater Room" in honor of Rossini's Stabat Mater, which debuted in this hall in 1842.

The walls of the library are painted with 6,000 coats of arms. These coats of arms represent University student leaders.