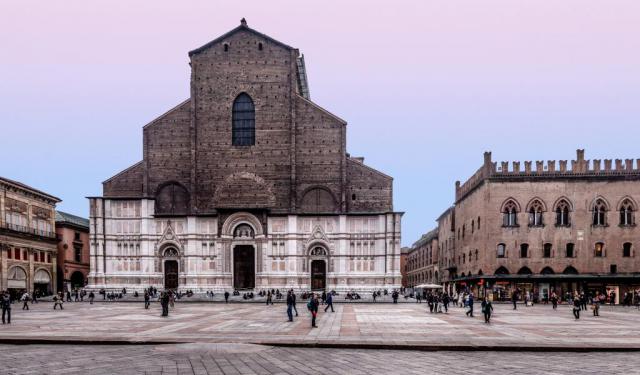 Image by Puscas Vadim on Wikimedia under Creative Commons License.

There are many magnificent, centuries-old churches in Bologna. Many of them are well-preserved and worth visiting during your stay in this fascinating old city. You can see unforgettable religious paintings by world famous artists. This self-guided tour will lead you to the majestic churches in downtown Bologna.
How it works: Download the app "GPSmyCity: Walks in 1K+ Cities" from iTunes App Store or Google Play to your mobile phone or tablet. The app turns your mobile device into a personal tour guide and its built-in GPS navigation functions guide you from one tour stop to next. The app works offline, so no data plan is needed when traveling abroad.

1) Basilica of San Petronio (must see)

The Basilica of San Petronio is the main church of Bologna, northern Italy. It dominates the Piazza Maggiore. It is the sixth largest church in the world, stretching for 132 meters in length and 60 meters in width, while the vault reaches 45 meters inside and 51 meters in the facade. It can contain about 28,000 persons. The basilica is dedicated to the patron saint of the city, Saint Petronius, who was the bishop of Bologna in the fifth century. The construction was a communal project of Bologna, not of the bishops. The property was a symbol of communal power that was not transferred from the city to the diocese until 1929; the basilica was finally consecrated in 1954. It has been the seat of the relics of Bologna's patron saint only since 2000.

The interior is notable for a Madonna with Saints by Lorenzo Costa the Younger and a Pietà by Amico Aspertini. Also the colours of the walls and the stained glass windows are noteworthy. The choir was made in 15th century by Agostino de' Marchi, while the ciborium is a work by Vignola.

Image by GennaroBologna on Wikimedia under Creative Commons License.
Sight description based on wikipedia
2

Santa Maria della Vita is an impressive church built in 1787, which once served to house the city’s sick and needy. Its Baroque interior contains several beautiful 15th century sculptures created by such famous artists as Niccolò dell'Arca, Floriano Ambrosini and Alfonso Lombardi.
Image by Parsifall on Wikimedia under Creative Commons License.
3

San Giacomo Maggiore is a church in Bologna, central Italy. It was founded by the Augustinian Order in 1267 and houses, among the rest, the Bentivoglio Chapel, featuring numerous Renaissance artworks. A community of hermits had established itself near the walls of Bologna, along the Savena river, as early as 1247. Here they founded a monastery with the annexed church of St. James. They were later merged with the Augustinian Order in 1256 and, as they needed a larger religious complex within the walls, in 1267 construction of the new church in the present location. The edifice was finished in 1315, but it consecration took place in 1344 after the completion of the apse section.

The façade is the oldest part of the church, with its late-Romanesque proportions. The decorations in Istrian stone on the ogival windows, in Venetian style, were added by Lombardy masters in 1295. The four funerary cells were added in the early 14th century, a few time after those in the portico, which date to the 13th century and had frescoes; the original entrance protyrus was modified in the same period.

Image by sailko on Wikimedia under Creative Commons License.
Sight description based on wikipedia
4

Santo Stefano is a complex of churches locally known as Sette Chiese, or Seven Churches. According to tradition, it was built by Saint Petronius, a 5th century city bishop, in the place of a temple to the goddess Isis. Among the churches are the 8th century Church of St. John the Baptist (or the Holy Crucifix), the 5th century Holy Sepulchre and San Vitale ed Agricola, which also dates back to the 5th century. A 13th century portico known as Pilatus' Court connects the other buildings to the 13th century Church of the Holy Trinity.
Image by mararie on Flickr under Creative Commons License.
Sight description based on wikipedia
5

Ex-Chiesa di Santa Lucia is a 17th century church. It no longer functions as a church, but as a lecture hall for students of Bologna University. Notable adornments include its Baroque sculptures and a statue created by Mazza in 1700.
Image by SrdjanRadovic99 on Flickr under Creative Commons License.
6

6) Basilica of San Domenico (must see)

The Basilica of San Domenico is one of Bologna’s major churches. The remains of Saint Dominic, founder of the Order of Preachers (Dominicans), are buried inside the exquisite shrine Arca di San Domenico, created by Nicola Pisano’sm and Arnolfo di Cambio, with later additions by Niccolò dell'Arca and a young Michelangelo. The square in front of the church is paved with pebbles, as it was in medieval times. The square was where the faithful listened to sermons and also served as the original cemetery. The brick column in the middle of the square has a bronze statue of St. Dominic (1627) and on the back of the square a marble, brick and copper column contains the Madonna of the Rosary, designed by Guido Reni (1632), commemorating the end of the city’s struggle with the plague.
Image by Georges Jansoone on Wikimedia under Creative Commons License.
Sight description based on wikipedia
7

San Giovanni Battista dei Celestini Church, built in 1369, is a small church that houses many works of art, including splendid frescoes by Franceschini, Haffner, Mastellata and Mignani, as well as sculptures by Mazza.
Image by Tom Danita on Flickr under Creative Commons License.
8

San Paolo Maggiore Church, built in 1606, has a beautiful facade. Inside, you can see the amazing works of Antonio e Giuseppe Rolli. The altar is adorned with priceless paintings by such masters as Guercino, Giuseppe Maria Crespi and Lodovico Carracci, author of the famous Paradiso.
Image by slgckgc on Flickr under Creative Commons License.