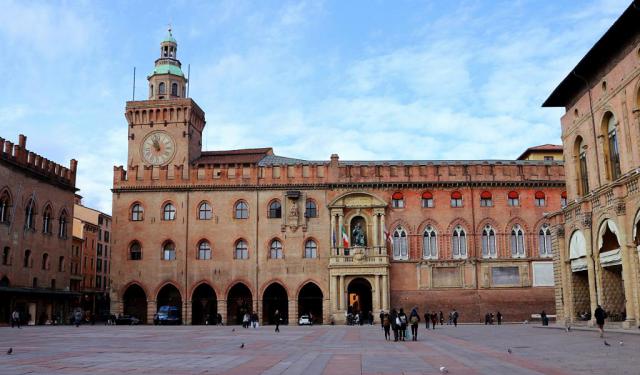 Image by Ilario on Wikimedia under Creative Commons License.

Bologna is an ancient city with beautiful architecture. In these palaces you can see art by the great masters, intricately decorated interiors and luxurious old furniture. This self-guided tour will lead you to Bologna’s most historically significant palaces.
How it works: Download the app "GPSmyCity: Walks in 1K+ Cities" from iTunes App Store or Google Play to your mobile phone or tablet. The app turns your mobile device into a personal tour guide and its built-in GPS navigation functions guide you from one tour stop to next. The app works offline, so no data plan is needed when traveling abroad.

The Palazzo Aldovrandi is a Senatorial palace on Strada di Galliera in Bologna, built in Rococo style. Replacing an older construction, the palace we see today began in 1725 under the patronage of the Cardinal Pompeo Aldrovandi with plans commissioned from Franco Maria Angelini. After Angelini's death in 1731, the work, including the Rococo facade, ornamented with Istrian marble, continued by 1741 under Alfonso Torreggiani. The cardinal's once large art collection mainly made its way to the National Gallery of London. The library was dispersed by the middle of the 19th century. In the 19th century the Aldrovandi family had a majolic factory in a section of the palace. The interior contains the frescoes of Vittorio Maria Bigari. The grand entry staircase is particulary notable. The palace changed hands in the 19th century to the Montanari family.
Image by Sailko on Wikimedia under Creative Commons License.
Sight description based on wikipedia
2

The 16th century Marescalchi Palace is known for housing many wonderful frescoes and paintings. Floriano Ambrosini designed its beautiful façade. Inside are paintings by Tiarini, Reni and Tibaldi and a unique oval room with intricate adornments.
Image by antmoose on Flickr under Creative Commons License.
3

Caprara Palace, designed by Francesco Morandi, boasts an impressive stairway from 1705 and splendid frescoes. During his trip to Bologna, Napoleon resided here. Currently, it houses the Prefecture of Bologna.
Image by marco monetti on Flickr under Creative Commons License.
4

Palazzo dei Notai is a palace in Bologna. Facing the Piazza Maggiore, it was built in 1381 by the city's notaries guild as their seat, under design by Berto Cavalletto and Lorenzo da Bagnomarino. Another section facing Palazzo d'Accursio was remade by Bartolomeo Fioravanti around 1437. It was again restored in 1908 by Alfonso Rubbiani. The interior has 15th century frescoes.
Image by Gaspa on Wikimedia under Creative Commons License.
Sight description based on wikipedia
5

Palazzo d'Accursio (or Palazzo Comunale) is a palace in Bologna. It is located on the Piazza Maggiore and had been the city's Town Hall until 11 November 2008. Palazzo d'Accursio is home to the Civic Art Collection, with paintings from the Middle Ages to the 19th century. It also houses the Museo Morandi, with the works by Giorgio Morandi donated to the comune by his family. In 1336 it became the seat of the Anziani ("Elder"), the highest magistrates of the commune, and then seat of the government. In the 15th century it was restored by Fioravante Fioravanti, who added, among the other feature, the Clock Tower (Torre d'Accursio).

The façade features a portcullis and a Madonna with Child, a terracotta by Niccolò dell'Arca in the upper section. Over the portal is a large bronze statue of the Bolognese Pope Gregory XIII (1580). A bronze statue of Pope Boniface VIII is now in Medieval Museum. The Hall of the Communal Council, on the first floor, is where the Bolognese Senators met, and contains a frescoed gallery ceiling by Angelo Michele Colonna and Gioacchino Pizzoli (1675–1677). The Farnese Hall, on the second floor, was rebuilt in 1665 by Cardinal Girolamo Farnese. It has fresco decoration by pupils of Francesco Albani.

Image by Georges Jansoone on Wikimedia under Creative Commons License.
Sight description based on wikipedia
6

6) Palace of Podestà (must see)

Palace of Podestà is located in the city’s main square, Piazza Maggiore. It dates back to the 13th century and was reconstructed in the 15th century, by designer A. Fioravanti. There is also a tall medieval tower created by Master Alberto, an engineering masterpiece built not on the ground but on the pillars of the palace’s arched vault.
Image by Steffen Brinkmann (Szs) on Wikimedia under Creative Commons License.
7

It houses important historical, philosophical, political, literary, artistic, biographical and bibliographical texts as well as an extensive section dedicated to Bologna's culture. The library holds around 35,000 manuscripts and incunabula, among other objects. Upon entering, visitors are asked to hand over all bags and writing materials which can be picked up when leaving. The building is made up of two levels with a lower portico and inner courtyard that surround the former church of Santa Maria dei Bulgari. The upper level houses the study rooms of the legisti, and the artisti. The upper level still houses the Anatomical theater of the Archiginnasio, which was built in 1637 by Antonio Levanti.

Image by Paolo Carboni on Wikimedia under Creative Commons License.
Sight description based on wikipedia
8

Palazzi dei Pepoli is made up of two historical palaces built at different times. It houses several works by famous artists, including frescoes, paintings of the Pepoli family and luxurious furniture.
Image by Michela Simoncini on Flickr under Creative Commons License.
9

The Gothic Palazzo Della Mercanzia, dating back to 1384, was made from clay brick and marble. It contains statues of the patron saints of Bologna, a statue of Justice and beautiful paintings by famous artists. Heavily damaged during World War II, it underwent reconstruction to restore its former beauty.
Image by Paolo Carboni on Wikimedia under Creative Commons License.
10

Palazzo Bolognini is one of the city’s most beautiful palaces. Its construction began in 1517 and was completed 1602. The sculpture of the façade, by Alfonso Lombardi and Niccolò da Volterra, is especially impressive.
Image by Giovanni Dall'Orto on Wikimedia under Creative Commons License.
11

The Renaissance Palazzo Fantuzzi, built in 1517, was an occasional residence of King James III and VIII. It boasts a magnificent façade decorated with elephants made in the Tosco-Roman tradition. Inside, there many fine frescoes and sculptures that are well worth seeing.
Image by Franco Folini on Wikimedia under Creative Commons License.