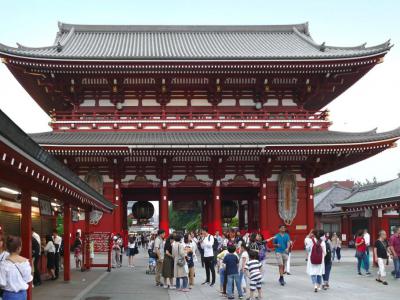 The Asakusa Shrine is located on the east side of the Senso-ji temple in Tokyo. It is a Shinto shrine that was built to honor the three men who built the Senso-ji Temple.

The Asakusa Shrine was built in 1649 by the Tokugawa Shogun, Tokugawa Iemitsu. The Bodhisattva Kannon statue in the Senso-ji Temple appeared in the fishing net of two fishermen brothers, Hinokuma Hamanari and Hinokuma Takenari. Its significance was recognized by the headman of the Asakusa village, Hajino Nakatumo who converted his house into what is now the Senso-ji temple. All three men became Buddhist monks and are enshrined as deities in the Asakusa Shrine.

The Asakusa shrine is located down a small street east of the Senso-ji Temple. A large stone gateway leads visitors and worshipers into the shrine. Unlike most historic and religious structures in Tokyo, it survived the bombing raids of World War II in 1945. The Japanese Government designated the shrine as an important cultural property in 1951. It has an architectural style called Gonden Zukuri. The shrine is guarded by two stone guardian half-lion half-dog sculptures called the Komainu who protect it from evil. It is the venue of the Sanja festival held annually in May which is one of the three most important festivals celebrated in Tokyo.

Why You Should Visit:
Centrally located in Asakusa near many interesting eating and drinking spots.
Everything around here is styled around how things would have been way back when.
While the Shrine is not very big, it has a large enough park as well as imperial attributes to the right of it.

Tip:
Tourists are allowed to enter the Shrine location, but cannot take photos inside – only the front.
Make sure to visit the temple after dusk. Although the doors will be closed, an opportunity to snap up photos of the temple at night is breathtaking.