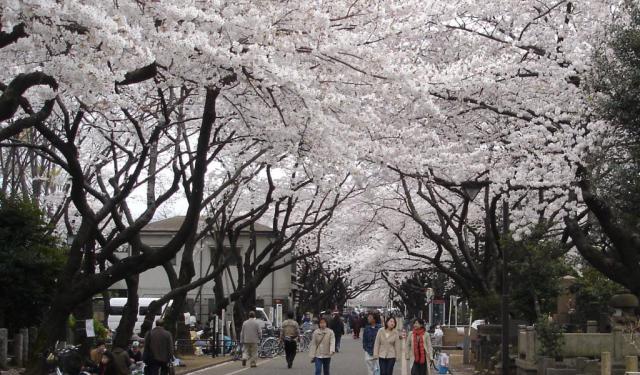 Yanaka Cemetery is a top attraction in the area. The main path through the cemetery is well kept and pleasant to stroll. With a high concentration of old temples in the district, the air here is filled with nostalgia. Stop by Yanaka Ginza to try the local food or pick up a souvenir, as the prices here tend to be much lower than in the city center. If you want to experience Tokyo the way it used to be, follow this self-guided walking tour.
Image Courtesy of Wikimedia and Multa.
How it works: Download the app "GPSmyCity: Walks in 1K+ Cities" from iTunes App Store or Google Play to your mobile phone or tablet. The app turns your mobile device into a personal tour guide and its built-in GPS navigation functions guide you from one tour stop to next. The app works offline, so no data plan is needed when traveling abroad.

Tennoji Temple is a centuries-old Buddhist temple that is known around the world for its bronze Buddha statue. It is located at the forefront of the Yanaka Cemetery, a former Buddhist cemetery that was converted to a public space with the Meiji government.

The temple was built in 1274 by Nichiren. The Buddha statue, known locally as Tennoji Daibutsu, was crafted in 1690 by Ota Kyuemon. Tennoji Temple is also home to one of the Seven Lucky Gods, Bishamuonten. He is the protectorate of the righteous and the patron of warriors.

A five-story pagoda once stood near the temple, but was destroyed in 1957 as part of a suicide pact between a married man and his much younger lover.

Now facing Nippori Station, Tennoji Temple offers a respite of solitude from the busy and vibrant Tokyo streets. Visitors can walk through the cemetery and around the grounds as part of their walking tour of the area. The temple is free for all guests.

Yanaka Cemetery was once a Buddhist cemetery. This is evidenced by the Buddhist temple, Tennoji, and its large, bronze statue of the Buddha. During the Meiji Restoration, which began in the 1860s, the cemetery was transferred into a public one so that Shinto funerals and burials could take place.

Yanaka Cemetery encompasses more than 1,000 square meters and has about 7,000 graves. Also located on the cemetery grounds are the ruins of a 20th century, five-story pagoda and a large number of cherry trees that line the walkways. The blossoming trees make the cemetery a popular tourist location in late-March and April of each year.

The cemetery is open to guests 24-hours per day. However, the cemetery is not well-lit at night and may be best viewed during daylight hours.
Image Courtesy of Wikimedia and Cabeza2000.
3

Kannonji Temple is tucked away in the streets of Tokyo. The Shingon Buddhist temple was established in 1648. Along with the temple, tourists will find a graveyard, a small Buddha statue and a memorial to the 47 ronin.

Visitors may be aware of the Kannonji Temple due to the story of the ronin. Also known as the Ako incident, the 47 ronin story has been retold in terms of plays, opera, art, literature and film. The ronin met at the Kannonji Temple to develop the plot to avenge the death of their master.

The temple is surrounded by buildings and walls. One of these walls is the tsuji-bei wall, which was originally from the Edo period. This protected cultural property is one of the few remaining walls of the city that was once divided by similar structures. The oft-photographed wall is unique in style due to the stacking of mud and tiles to create a strong, time-tested form.
Image Courtesy of Wikimedia and Joe Mabel.
4

One of the most photographed temples in Tokyo is Daienji Temple. This Tendai Buddhist temple is known for its many statues. It is also known for honoring Daikokuten, the God of Wealth.

The seven statues near the entrance to the temple grounds are those of the Seven Lucky Gods. There are also statues to commemorate the 500 disciples of Buddha. These statues, which are visible from the street outside of the temple, were created to honor victims of a 1772 Tokyo fire that is thought to have begun at this temple.

In addition to these statues, there are numerous figures like the Yakushi Nyorai, the Buddha of Healing. It has the appearance of being encased in gold due to the act of placing gold leaves on the body, which is a common practice among visitors.

The Daienji Temple is open daily from 8 AM through 5 PM. It is accessible from Shimomeguro in Meguro.
Image Courtesy of Wikimedia and Abasaa.
5

Okakura Tenshin was a pioneer in the modern art of Japan. Known widely outside of Japan for his work, "The Book of Tea," Tenshin was instrumental both in developing modern art styles and preserving traditional Japanese techniques.

Tenshin was curator of the Department of Chinese and Japanese Art at the Museum of Fine Arts in Boston. He was also one of the founders of the Tokyo School of Fine Arts and the principal founder of the Japan Art Institute. The former site of the latter is now the location of Okakura Tenshin Memorial Park.

This small park contains a hexagonal building that houses a statue of Tenshin, which was designed by sculptor and artist Hiragushi Denchu from a cast that was created in 1931.

The park was established by Taito City. It was opened in 1967. Okakura Tenshin Memorial Park is open 24 hours. It is free to enter and pay respects to the artist. For those on walking tours of Yanaka, they may note that the park has a public restroom as well.
Image Courtesy of Wikimedia and Asanagi.
6

Visitors to Tokyo can take a step back in time when they walk through Yanaka Ginza. This street in the Yanaka neighborhood of east Tokyo offers traditional dining and shopping. Unlike some of the other shopping avenues in the city, it is as popular with locals as it is with tourists.

Shoppers can find everything from umbrellas to fresh fish for sale in the open air of this shopping street. Tourists can grab a bite to eat or shop for souvenirs without paying the high prices found in many other spots in the city.

The food offerings on Yanaka Ginza are mostly local fare. Street foods are common, as are small cups of sake. However, tourists should remember to keep local customs in mind. It is considered rude to eat or drink while walking down the street. Tourists should find a quiet place to enjoy the food before continuing on their way.
Image Courtesy of Flickr and Aapo Haapanen.
7

The Asakura Museum of Sculpture is a museum that honors sculptor Fumio Asakura. It was opened in Tokyo by his family in 1967, two years after Asakura's death.

The museum is housed in Asakura's home, school and studio. The building is made from reinforced concrete and glass. The roof of the museum is home to the city's oldest, continually tended roof garden. Asakura used this garden to teach horticulture to his pupils so that they could have a better understanding of nature.

The permanent exhibition at the Asakura Museum of Sculpture includes sculptures and portraits created by Asakura. The museum also hosts regular events like gallery talks, tours of the gardens and an architectural tour. A calendar of special events can be found on the museum's website.

The museum was named a cultural property by the government in 2001. The rooftop garden and the courtyard have both been registered as national places of scenic beauty.
Image Courtesy of Wikimedia and Calton.