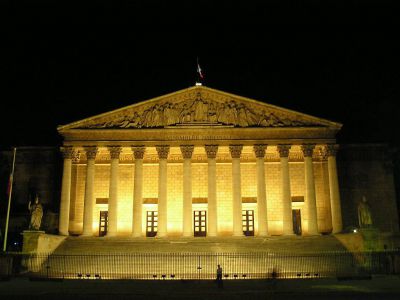 Assemblée Nationale, the lower chamber of the French parliament, is housed in the building originally known as Palais Bourbon (the Bourbon Palace). Its construction started in 1722 under the supervision of Italian architect, Lorenzo Giardini, to a design by himself and Hardouin Mansart. After Giardini's death in 1724, Jacques Gabriel took over the project and completed it in 1728. The name of the palace refers to the Royal house of Bourbon, who were ousted by the republicans during the French Revolution. The Palais Bourbon was renovated and enlarged in 1765. In 1768, the adjoining Hôtel de Lassay was also embraced into the complex. The latter was declared a national property during the French Revolution. At that time, the National Assembly, which existed from June 17 until July 9, 1789, was a transitional body between the Estates General and the National Constituent Assembly.

Between 1804 and 1807, Napoleon Bonaparte added to the palace a colonnaded front in a bid to mirror the Madeleine temple on the opposite bank of the Seine. Since 1830, the Palais Bourbon has been the seat of the Assemblée Nationale. If you want to visit the building, you must arrange an advance reservation.
Image by Christophe EYQUEM on Wikimedia under Creative Commons License.
Sight description based on wikipedia