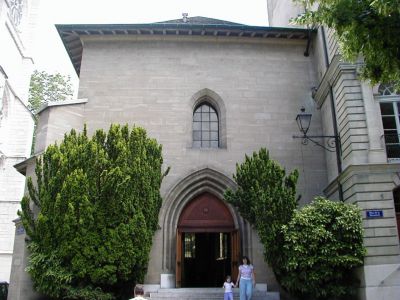 Originally known as the Notre-Dame-la-Neuve Chapel, the Calvin Auditorium or Calvin Auditory (French: Auditoire de Calvin) is a chapel which played a significant role in the Protestant Reformation, and is closely associated with Jean Calvin, Theodore Beza and John Knox.

Directly adjacent to St. Pierre Cathedral in Place de la Taconnerie, this austere Gothic-style edifice was constructed in the 15th century on the site of a 5th-century temple, and was initially dedicated to Notre Dame la Neuve.

From 1536, the time of Geneva's Reformation, it had been used as a lecture hall where Jean Calvin actively expounded his reformist theology, with the Bible studies conducted here at 7 o'clock every morning. In 1559, it served as the original home of the University of Geneva. Once Geneva accepted the Reformation, it became a haven for Protestant refugees from all over Europe, and Calvin passed this building over to them for worshiping in their own language. It was also used by the Scottish reformer John Knox during his exile to Geneva in the 1550s. Here, he ministered to an English-speaking refugee congregation and developed many of the ideas that proved influential in the Scottish Reformation movement. Subsequently, it became a place used by numerous Protestant refugee groups, including Italian Waldensians, Dutch Reformed and Scottish Presbyterians, and, as such, has been viewed by many Reformed churches throughout the world as a crucible of their faith.

Nowadays, in keeping with tradition established by Calvin, this protestant chapel still offers sermons in French, English, Dutch, German, Italian and Latin, and hosts congregations of the Italian Reformed Church and the Church of Scotland as its main place of worship every Sunday.

In 1963, a two-manual mechanical-action pipe organ, built by Gruaz, was installed in the Auditoire de Calvin. In 2009, during the 500th anniversary of Calvin's birth, the need for a more versatile organ became apparent. Funds for it were raised through a series of concerts, generous individual donations and support from the Hans Wilsdorf Foundation and the Loterie Romande. The new organ was installed in April 2014 and was celebrated with a concert festival that has since become annual.
Image Courtesy of Wikimedia and Doc glasgow.
Sight description based on Wikipedia.