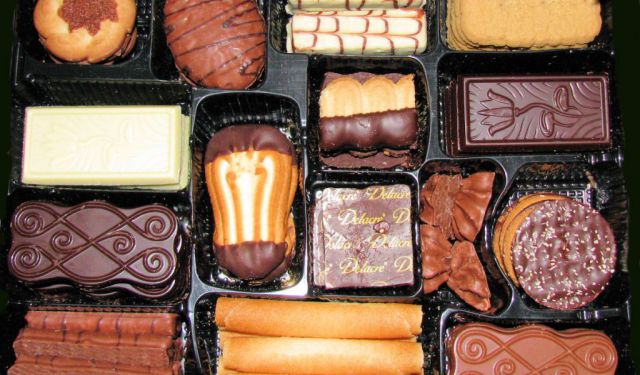 Chocolate started to gain popularity in Switzerland in the early 16th century, and has since evolved to become a highly appreciated Swiss commodity throughout the world. Almost every city or town in the country has at least one chocolate shop, and Geneva is by far no exception. Take this self-guided tour to acquaint yourself with the facets of Geneva's chocolate history and taste some of the finest samples of this locally-made product.
Image Courtesy of Wikimedia and Sujit kumar.
How it works: Download the app "GPSmyCity: Walks in 1K+ Cities" from iTunes App Store or Google Play to your mobile phone or tablet. The app turns your mobile device into a personal tour guide and its built-in GPS navigation functions guide you from one tour stop to next. The app works offline, so no data plan is needed when traveling abroad.

Family-run for three generations, this Geneva confectionery has been around since the 1950s, having one of the most popular terraces on Place du Bourg-de-Four, a lure for true chocoholics. Renowned for its excellent homemade chocolates, including hot chocolate, Chocolaterie ARN offers a huge variety of this snack.

All their products are homemade. Notably, they sell pralines with drawings of views of Geneva, or Geneva pavers (understandably for those who have to give tourist gifts or wish to bite into the Reformers Wall). Either on their terrace or inside the tea room you can enjoy delicious truffles, chocolates, pastries and caramels over a cup of tea or coffee. Otherwise, you may go for one of their many ice cream cups.

The service is friendly and quick, given that they have to run between the tables in the tea room and those on the terrace. Open on Sundays, this small address makes a good stop for a snack after visiting an exhibition at Maison Tavel or elsewhere.

Established since 1939, the Auer Chocolatier has been in the hands of the Auer family for five generations. Famous for their longstanding tradition of chocolate making, which they ardently uphold, today this place is a regular gathering spot for gourmets and gourmands who have the taste for chocolate with high cacao content and quality chocolate alcohol-cream fillings. Amid the enormous variety of products on offer here, there's also something for those who prefer mildness and smoothness, such as a large choice of pralines and milk chocolate.

The Auers particularly pride themselves on the "Pavé Glacé of Geneva", a marvellous chocolate created by Henri Auer in 1940. This and many other local specialties – over 50 in total – are all homemade in a traditional manner based on the recipes of Mr. Henri Auer and his descendants, ensuring irreproachable quality and matchless taste.

Founded in 1921, this small artisanal chocolate institution started off under the name “Confiserie Werder”. At the end of WWII, the business was acquired by Madame Bischof who gave it its current name “La Bonbonnière” along with a reputation for high-quality chocolates and service, which was later upheld by new proprietors, the Allombert and then the Marguerat families.

Since the early 2000s, this confectionery has been run by a duo of passionate chocolate masters and entrepreneurs, Yvan Loubet and Cédric Rahm, who continue the history of excellence and tirelessly invest their knowledge in the most delicate flavours and associations to reveal the aromas and subtleties of chocolate. In doing so, they create exceptional products using the carefully selected ingredients and best cocoa beans – refined, harvested, dried and roasted in a strict accordance with the ancient procedures respectful of the environment – delivered from South America, Madagascar and elsewhere in the world.

The result is a wide variety of chocolates: ganaches, pralines, Geneva cakes, cherries from Kirsch du Valais, ginger sticks, candied orange sweets and different types of chocolate candies, with subtle tastes, original and surprising, like bars with Espelette pepper. There is also a choice of “vegan” and “gluten-free” products, plus a number of delicious pastries, such as small and large cakes, biscuits, pies, desserts, verrines and more.

Complementing the wealth of epicurean pleasures here is a beautiful atmosphere and friendly personnel eager to help you decide on the large assortment on offer. You can also personalize your choice by adding more ingredients to your taste, or even a picture, a logo or a phrase.

A live tribute to the Swiss traditions and culture, this chocolate factory in the emblematic Rue Du Rhône of Geneva has been in business for over 140 years! Established by one Monsieur Pertuiset in 1875, at the outset of the Belle Epoque, it quickly gained reputation by producing deliciously filled chocolate bars. Back then, the horse-drawn carriage of Monsieur Pertuiset often blocked the street until he had had the beloved Du Rhône praline to his heart's content.

In the 1950s, some of the manuscripts containing the company's famous original recipes mysteriously disappeared; thenceforth all the Du Rhône recipes are guarded with utmost care and kept out of sight, in a secret vault. In 1967, the Du Rhône sweets conquered the world, effectively putting the company in the top ranks of Swiss chocolatiers.

With passion, excellence, know-how and creativity as their main ingredients, Du Rhône Chocolatier never fails to surprise the palates of their customers with freshness and quality. Among their fine specialties are The carré amer, marc de dôle and mocca glacé. You can really indulge yourself in this shop and have a nice cup of hot chocolate, as well. Perfect for the chilly weather!

The product of merge of two historic chocolate houses, Stettler and Castrischer, the Stettler & Castrischer Chocolaterie is the multiple laureate of the Quality Certificate of the Year. This fact alone is a good proof that quality does come first in this shop.

One of its forefathers, the famous Stettler Chocolate Factory, renowned far beyond the Swiss borders for making traditional, high-quality chocolates, was founded by Paul Stettler in 1947. Awarded for quality at the Culinary Art exhibition in Bern in 1954, the factory continued to perpetuate tradition and know-how throughout decades. The Stettler flagship creation is the famous pavé de Genève.

Its partner, the Castrischer confectionery pastry shop, is the brainchild of an enthusiast from Boulevard du Pont d'Arves, and dates back to 1964. For many decades, its legendary, mouth watering Black Forest cake has adorned numerous Sunday tables throughout Switzerland and further afield. Equally loved by young and old, it serves as a sort of “bridge crossing generation gap”.

Needless to say that the passing of know-how remains a top priority at Stettler and Castrischer to this very day.

The history of Maison Rohr began on March 1, 1936 when young Hans Rohr bought from his boss a small shop on boulevard du pont-d'Arve in Carouge, serving tea and cakes. In a bid to ensure the ultimate freshness of their product and to avoid temptation of re-offering it the following day, each evening they brought all the unsold pastries to hospitals, asylums and the Salvation Army. The idea was, "You might as well feed the poor, rather than throw it away".

As the pastry shop grew successful, in 1950 Hans opened a branch in Geneva's Place du Molard and started to make chocolate alongside pastries. In 1952, inspired by further success, he took a radical turn and devoted himself fully to chocolate making, as it seemed more passionate than cupcakes and commercially more interesting. Eventually, the image of the chocolate maker Rohr replaced that of the pastry chef.

In 1968, his son Henri took over the business, switching focus towards dark chocolate above the habitual truffles. His first creation, the famous Poubelles de Genève (“Geneva dustbins”), hardly synonymous with a gourmet dream as such, was born out of a farce and sold rather well nonetheless. Eventually, he introduced Champagne marc truffles, pralines, Florins, Grand Marnier and other specialties.

The third generation of the Rohrs, Roger and Nicole, who have now taken over the reins of the family enterprise, perpetuate the tradition manifested in watchwords: beautiful, good, and chocolate in the highest art form. In keeping with the times, they have expanded the production range by adding, among other innovations, artisanal ice creams. The success of Maison Rohr doesn't seem to waver and today the company, member of the "Commerce et Qualité" association which brings together Geneva businesses reputed for quality, produces annually around 50 tonnes of handmade chocolate.

Given a chance, make sure to try the "Poubelles de Genève" and "Petits Calvins", which are the shop’s main specialties.