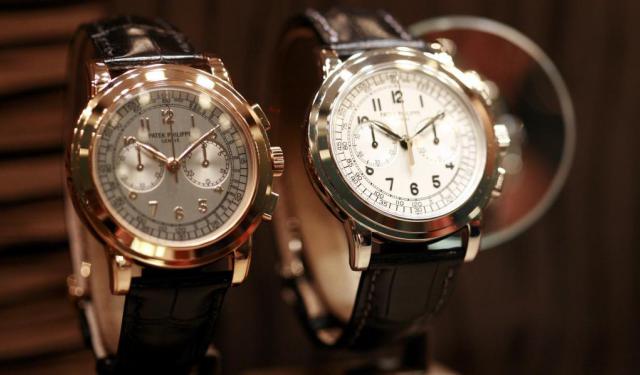 Image by Rama on Wikimedia under Creative Commons License.

Swiss watches are known as the best, when it comes to quality and precision. Some world-famous brands, such as Patek Phillipe, Swatch, Omega and Piaget were designed and masterminded in Geneva. The watch industry in Geneva dates back to the 16th century, and since then, it has developed rapidly and now makes the most desired watches. Take this tour to choose your watch from the best watch shops in Geneva.
How it works: Download the app "GPSmyCity: Walks in 1K+ Cities" from iTunes App Store or Google Play to your mobile phone or tablet. The app turns your mobile device into a personal tour guide and its built-in GPS navigation functions guide you from one tour stop to next. The app works offline, so no data plan is needed when traveling abroad.

Vacheron Constantin SA is a Swiss luxury watch and clock manufacturer founded in 1755. Vacheron Constantin is one of the oldest watch manufacturers in the world with an uninterrupted watchmaking history since its founding. It employs around 1,200 people worldwide as of 2018, most of whom are based in the company's manufacturing plants in Canton of Geneva and Vallée de Joux in Switzerland.

Vacheron Constantin is a highly regarded watch manufacturer. Over the years, notable Vacheron Constantin patrons and timepieces owners include Queen Elizabeth II, Alexander I of Yugoslavia, Pope Pius XI, Napoléon Bonaparte, Marlon Brando, William James, John D. Rockefeller, Diana Princess of Wales, Harry S. Truman, and the Wright brothers. The Vacheron Constantin pocket watch No. 402833 (1929), which was owned by King Fuad I of Egypt, ranks as one of the most expensive watches ever sold at auction, fetching US$2.77 million (3,306,250 CHF) in Geneva on April 3, 2005. In 2015, Vacheron Constantin introduced the pocket watch Reference 57260, which currently holds the title of the most complicated mechanical watch ever made, with 57 horological complications.

Visit the Vacheron Constantin boutique at the Place de Longermalle for a closer look at the word known masterpieces.

Image by Johnson Watch on Flickr under Creative Commons License.
Sight description based on wikipedia
2

The Bucherer is a successful family-run business since 1888. It gained popularity by directly addressing clients' needs and by providing professional advice. Bucherer watches are known for standing out with a well-built quality and superb design. Check out the Patrvi, Manero and Alacria collections.

Image by Carlfbucherer on Wikimedia under Creative Commons License.
3

Who would have known that two Polish immigrants would dictate the watch making industry for years to come, by setting up a small watch shop in Geneva in 1839? The Patek Philippe watches feature an exquisite design that is a perfect balance between classicism and modernity. The shop is always ready to assist you in finding the right time-keeping instrument.
Hours : Monday to Friday : 10:00 - 18:30; Saturday : 10:00 - 18:00
Image by Rama on Wikimedia under Creative Commons License.
4

The Gubelin presents the watch as an expression of personal lifestyle, and that can vary from classic steel quartz to mechanical movements. This watch-making company has proven through the years that it can please even the most spoiled customer, by offering some unique pieces. At this shop you can also purchase different jewelery items signed by Gubelin.

Le Petit-Fils de L.-U. Chopard & Cie S.A.,commonly known as Chopard, is a Swiss manufacturer and retailer of luxury watches, jewellery and accessories. Founded in 1860 by Louis-Ulysse Chopard in Sonvilier, Switzerland, Chopard has been owned by the Scheufele family of Germany since 1963.

The company founder, Louis-Ulysse Chopard, was a Swiss watchmaker who grew up in Sonvilier, a town near Bern. In 1860, he established his L.U.C. manufacturing company in Sonvilier, having observed that it was more profitable to market the finished watch than to just make the mechanical movement.

After Louis-Ulysse's death in 1915, the company was taken over by his son Paul-Louis and grandson Paul-André. The company specialised in making pocket watches and ladies’ wristwatches. In 1937, at that time a company of 150 employees, the company relocated to Geneva. This enabled the movements made by the company to be certified with the Geneva Seal, a mark applied only to watch movements made in the Canton of Geneva. Paul-André took over the company in 1943.

In 1963, having no children wishing to continue in the business, Paul-André Chopard sold it to Karl Scheufele III, a German goldsmith and watchmaker from Pforzheim, who was seeking a watch movement manufacturer exclusively for his own business.

Chopard is best known for making high-quality Swiss watches and jewellery, and its clients have included Tsar Nicholas II of Russia. The company is headquartered in Geneva and has a site in Fleurier, Canton of Neuchâtel, that manufactures watch movements.

With boutiques on and around the Rue du Rhône, this is one not to miss on your Timepiece Shopping Walk.
Image by Johnson Watch on Flickr under Creative Commons License.
Sight description based on wikipedia
6

Roger Dubuis is one of the few Swiss watch companies that produce most the components of its calibres in-house. Roger Dubuis calibers are made up of several hundred components finished by hand. The calibres are made of as gold, diamonds, and titanium, as well as new materials such as carbon, ceramic and cobalt. Most of the timepieces are skeleton watches.

Dubuis timepieces bear the Poincon de Geneve (the Hallmark of Geneva).
Image by gabihil on Flickr under Creative Commons License.
Sight description based on wikipedia
7

La Maison de L'Horlogerie, or the House of Watches, is a shop which specializes in Swiss watches and other trademarked items, and it's located in the center of the city. Since they were established, some 40 years ago, they have continually gained new market shares and have grown to be a strong and well-reputed player in the local and international watch market. You can have confidence when you shop here, as the shop’s friendly staff will assist you with your choice.
Image by Schlüsselbein200 on Flickr under Creative Commons License.
8

The Espace Temps is yet another specialized shop with Swiss watches, and it's also one the first official retailers of the Longines trademark. If you are looking to buy a watch to suit your style or new look, this is the place to go. The shop’s policy is that each customer has individual needs, and it’s their pleasure to meet them.

The Swatch is undeniably one of the most recognized watch brands in the world. The company was born in the 1970s, and since then has been amazing people with top quality and innovative designs and highly affordable prices. Their watches are for all occasions and will compliment your everyday life. Amongst the most popular models are Metal Swatch, Swatch Skin Chrono, Swatch Snowpass and Swatch Beat.