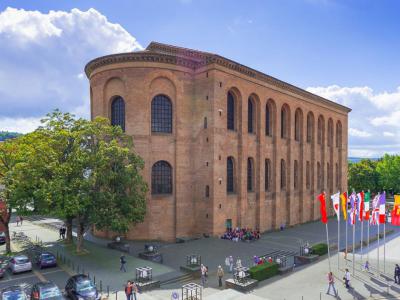 The Basilica of Constantine, or Aula Palatina is a Roman palace basilica that was built by the emperor Constantine (306–337 AD) at the beginning of the 4th century.

Today it is owned and used as church by a congregation within the Evangelical Church in the Rhineland. The basilica contains the largest extant hall from antiquity ranked a World Heritage Site. The room has a length of 67 m, a width of 26.05 m and a height of 33 m.

The Aula Palatina was built around 310 AD as a part of the palace complex. Originally it was not a free standing building, but had other smaller buildings (such as a forehall, an entrance vestibule and some service buildings) attached to it. The Aula Palatina was equipped with a floor and wall heating system (hypocaust).

In 1944, the building burned due to an air raid of the allied forces during World War II. When it was repaired after the war, the historical inner decorations from the 19th century were not reconstructed, so that the brick walls are visible from the inside as well.
Image by Berthold Werner on Wikimedia under Creative Commons License.
Sight description based on wikipedia