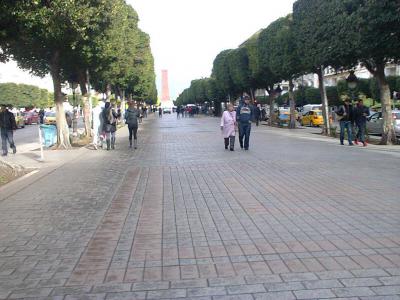 Avenue Habib Bourguiba is the main thoroughfare in Tunis. It spans from Labor Exchange Street (Rue de la Bourse du Travail), past the 14th January Square and on to Holland Road (Rue de Hollande). The avenue is named for the first president of Tunisia, Habib Bourguiba.

The street has wide pedestrian walkways that pass numerous restaurants, shops and places of interest. The tree-lined sidewalks provide ample shade throughout the length of the street. This shade is especially appreciated by the street cafes where visitors can stop for French-inspired meals and Mediterranean cuisine.

The avenue was originally called the Navy Promenade (Promenade de la Marine). It became home to the French Embassy, which was built in 1861. Now called the Independence Square (Place de l'Independance), the space also includes a statue of Tunisian philosopher Ibn Khaldoun.

Other important landmarks on Avenue Habib Bourguiba include the St. Vincent de Paul Cathedral, a Romanesque-Byzantine style building, which was added in 1897. The Art Nouveau-style Municipal Theatre, which still graces the avenue, was built in 1902.
Image Courtesy of Wikimedia and Bahbouhe.