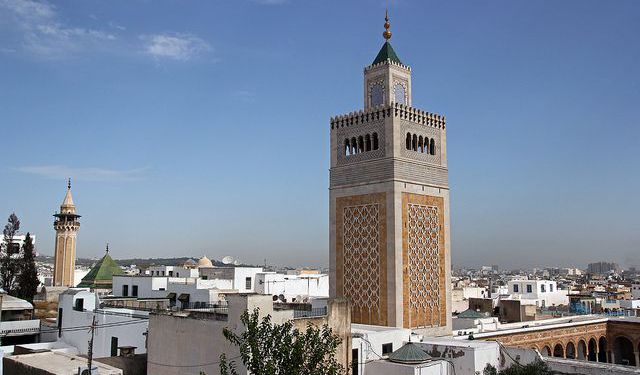 The city was controlled by numerous empires over the years, which has lent to its interesting art and architecture. With influences from the Umayyad Caliphate, the Ottoman empire, the Spanish and, most recently, the French, Tunis is an eclectic and historically vibrant city.

Tunisia gained independence from France in 1956. The country became a sovereign nation with Tunis serving as its seat of power. The Tunisian Revolution took place in 2011, which led to the Arab Spring. Many Arab nations changed hands during this time, which can be traced to the self-immolation of Mohamed Bouazizi in front of the provincial governor's office.

Visitors to Tunisia can see the past and the present unite by touring this city on foot. The 14th January Square recognizes the Tunisian Revolution with a memorial in the midst of the bustling city. The pedestrian-friendly city has wide streets that are peppered with restaurants, shopping and historic spots. Walk down Avenue Habib Bourguiba and take a stroll around Independence Square to see some of the best of the city.

For a fun venture into life in Tunisia, don't forget to patronize the souks. These shops have something for everyone, with food, drink, clothing, souvenirs and much more to take home and enjoy. There is also the Gate of France, which leads to the oldest part of Tunisia: the Medina.

Don't pass up the opportunity to see the ruins of Carthage by going on a Carthage walking tour. You'll take a trip back in time when you stroll through the UNESCO World Heritage site.

Take this self-guided walking tour to explore all that Tunis has to offer.
Image Courtesy of Flickr and grolli77.
How it works: Download the app "GPSmyCity: Walks in 1K+ Cities" from iTunes App Store or Google Play to your mobile phone or tablet. The app turns your mobile device into a personal tour guide and its built-in GPS navigation functions guide you from one tour stop to next. The app works offline, so no data plan is needed when traveling abroad.

14th January Square is a commemorative square in honor of the Tunisian Revolution that began on January 14, 2011. The catalyst for the revolution was the self-immolation of Mohamed Bouazizi who was protesting mistreatment by the government. This was the beginning not just of the Tunisian Revolution but of the Arab Spring that took place in Libya, Egypt, Yemen, Syria and Bahrain.

The square was previously called Africa Square. It held the monument of Jules Ferry, former Prime Minister of France. In 1956, when Tunisia gained independence from France, the statue was replaced with an equestrian statue of President Habib Bourguiba who was the first president of Tunisia. That statue was removed after the president was ousted from office in 1987.

A clock tower was added to the square where the statues previously stood. It is surrounded by a reflecting pool and a fountain of dancing water. Following the 2011 revolution, the equestrian statue of Bourguiba returned to the west of the square on June 1, 2016.

Avenue Habib Bourguiba is the main thoroughfare in Tunis. It spans from Labor Exchange Street (Rue de la Bourse du Travail), past the 14th January Square and on to Holland Road (Rue de Hollande). The avenue is named for the first president of Tunisia, Habib Bourguiba.

The street has wide pedestrian walkways that pass numerous restaurants, shops and places of interest. The tree-lined sidewalks provide ample shade throughout the length of the street. This shade is especially appreciated by the street cafes where visitors can stop for French-inspired meals and Mediterranean cuisine.

The avenue was originally called the Navy Promenade (Promenade de la Marine). It became home to the French Embassy, which was built in 1861. Now called the Independence Square (Place de l'Independance), the space also includes a statue of Tunisian philosopher Ibn Khaldoun.

Other important landmarks on Avenue Habib Bourguiba include the St. Vincent de Paul Cathedral, a Romanesque-Byzantine style building, which was added in 1897. The Art Nouveau-style Municipal Theatre, which still graces the avenue, was built in 1902.

Image Courtesy of Wikimedia and Bahbouhe.
3

The Municipal Theatre is a theatre that is located along the Avenue Habib Bourguiba. It was originally built in 1902 from fund by the city of Tunis. The architect, Jean-Emile Resplandy, chose the Art Nouveau architectural style. The theatre is known for being one of the few theatres in the world with this particular design.

The first theatre was built to hold 856 patrons. It was demolished in 1909 in order to be expanded both for patrons and performers. The theatre reopened with a 1,350-seat capacity in 1912.

In the 1980s, a plan was nearly carried out that would have demolished the theatre to make room for a commercial area. Public outcry prevented the destruction of the theatre, which was instead protected and preserved.

The theatre offers a variety of performances that appear throughout the year. Operas, ballets, symphonies and dramas are all commonly seen at the Municipal Theatre. It is the home of the Tunisian Symphony Orchestra and plays host to Carthage Theatre Days that is celebrated during Ramadan.
Image Courtesy of Flickr and Andrew Moore.
4

Construction of the church was completed in 1897. The bell towers were not added until 1910 due to a shortage of funds. The towers are built with reinforced concrete in the Hennebique technique, which uses bars embedded in the base of the concrete slab for structural support and to protect against fire.

The cathedral has a decorative yellow-and-white tile facade, a wrought-iron gate and marble columns that provide passage to a covered entryway. The church is open for visitors. Inside they will find an ornate altar and colorful stained glass windows. There is also a portrait gallery that displays images of numerous saints.

Independence Square is a public square in Tunis. Its name was given when Tunisia obtained independence from France in 1956. Prior to this, the square was called Residence Square due to the proximity of the French Embassy and residential homes near the square.

The square is located at the spot where Avenue Habib Bourguiba meets Rome Street (Rue de Rome), France Avenue (Avenue de France) and Jamel-Abdenasser Street (Rue Jamel-Abdenasser). It is a very popular tourist spot thanks to its central location and numerous landmarks.

Visitors will find the French Embassy and the Cathedral of St. Vincent de Paul at Independence Square. This is also the location of the Ibn Khaldoun statue, a memorial to the famous Tunisian philosopher and historian that was carved by artist Zubair al-Turki. In addition to the statue, a marble plaque etched with pearls of wisdom is located nearby. Another popular public art piece is the "I Love Tunis" sign, which is often used as a backdrop for tourist photos.
Image Courtesy of Wikimedia and Sami Mlouhi.
6

Bab el Bhar or Gate of France is a city gate that denotes the separation between the old city and the European section of Tunis. The gate is sometimes referred to as The Sea Gate. This is often the first spot tourists see before they enter the old city.

The original gate was built in the 10th century when the Aghlabids reigned over what are now parts of Italy, Libya, Algeria and Tunisia. The gate was torn down in 1848 and rebuilt in 1860 while the area was under French rule. The gate gained the name Gate of France during this time, but it was reinstated to its original name, Bab el Bhar, when Tunisia gained its freedom.

The gate consists of an arched entrance that is topped by a parapet and inscription. It also has an altitude marking of seven meters above sea level. Bab el Bhar was named a UNESCO World Heritage Site in 1979.
Image Courtesy of Wikimedia and Dennis Jarvis.
7

Mosquée Zitouna is the oldest mosque in Tunis. The large mosque consists of 1.2 acres (approximately 5,000 square meters). It has nine entrances and more than 150 columns that were sourced from the ruins of Carthage. The design of the building follows that of the Mosque of Uqba in the town of Kairouan, Tunisia.

Mosquée Zitouna is a mosque that goes by many names. It is sometimes called I-Zaytuna Mosque, Ez-Zitouna Mosque or El-Zituna Mosque. The literal English translation of the mosque is "Mosque of Olives." The name comes from the tomb of Santa Olivia that was at the location which, prior to its conversion into a mosque, was a Christian basilica.

It is thought that the mosque was built in 703 BCE. It was home to one of the first Muslim universities, the University of Ez-Zitouna. In its early days the university taught history, grammar, science, medicine, philosophy, law and the Quran.

Tip:
As a non-Muslim, you may take a look at the square of the mosque (via the main gate) and snap some photos, but will not be allowed entering to the prayer room.
Image Courtesy of Wikimedia and Ryadh Gharbi.
8

The Souks of Tunis are a series of markets located in the old city. There are many souks with their own unique specialties. The majority of these souks were built in the 13th century close to the Al-Zaytuna Mosque.

Souk El Berka was built in 1612 by Yusuf Dey. It is noted for being the old souk of black slaves in the city. A platform stood in the midst of the souk where slaves were bid on. Slavery was outlawed in the country in 1846 and the souk began selling jewelry instead of slaves.

Souk Es Sabbaghine is the furthest away from the mosque because it was historically the souk of dying textiles. This is thought to be an unclean activity, which necessitated its distance from the mosque. It is now among the souks that sell clothing and accessories. Visitors will also find some fish and meat at this souk.

There are many other souks that are exciting and interesting to explore for tourists who love to shop and mingle with locals.