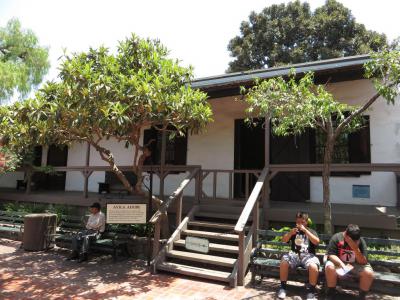 If you would like to know how the rich lived in Los Angeles in the 19th century, do visit the Ávila Adobe on Olvera Street. As the oldest residence still standing in Los Angeles, it is part of the El Pueblo de Los Angeles Historic Monuments. It was built in 1818 by Francisco Ávila, a wealthy cattle rancher, as a weekend and holiday home. He entertained friends here and traded his hides and tallow for fine furniture and the building’s wooden window and door frames.

The walls, built out of adobe bricks that had been sundried, are three feet thick. Once the floors were of hard-packed earth, but later varnished wooden planks were added. The ceilings are over 15ft high with cottonwood beams and the large rooms have many windows.

After Francisco Ávila’s death, his widow lived in the house until her death and it passed on to her children. Between 1868 and 1920 it was used as a restaurant and a bed and board. The area was a poor one and in 1926 the City Health Department decided to demolish the house. Luckily for history fans, an Englishwoman, Christine Sterling, who was interested in the city’s historical heritage, started a public campaign to save the building. Private donations flooded in from all around the city and the building was restored. The police department organized the prisoners of the county jail into work-groups and they cleaned up the surrounding plaza, turning it into a Mexican-style market-place.

Today only seven rooms remain of the original, larger house. They are open to the public as a house museum furnished as they would have been in Adobe’s time. You can see a four-poster bed, the family dining area, children’s ragdolls and, in the kitchen, an enormous washtub for bathing.

Why You Should Visit:
To see/imagine how life was back in the 19th century in this neighborhood, especially since most other houses have turned into shops/restaurants.

Tip:
The house/museum is free to the public and the public restroom is an added bonus.
You can see the whole place in 10 mins if you walk around, but take some time to also read the description on the wall.