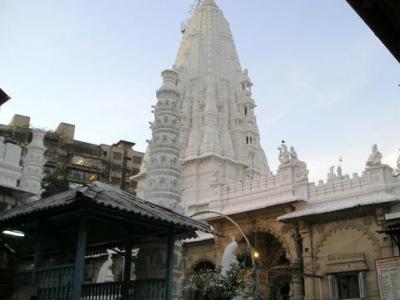 A tour down South Mumbai is the perfect way to get to a closer look at the city’s history and heritage. One such destination is the Babulnath Temple, which has existed even before the city itself. Worshipped within the temple is Lord Shiva, one of the three Gods of the Hindu Trinity.

Although the temple was constructed in the late 18th century, it is believed that the idol was worshipped since the reign of Raja Bhimdev during the 12th century. There are many stories that speculate the origin of the idols and temple. According to one particular story, a cow belonging to a wealthy goldsmith stopped giving milk. Many days passed, but the cow would not give milk therefore the goldsmith followed the cow and observed that at one particular spot she would stop and dispense all her milk. The spot was dug up to find the idol which is placed in the temple today.
Image by gbSk on Flickr under Creative Commons License.

This sight is featured in a self-guided walking tour of Mumbai, India within the mobile app "GPSmyCity: Walks in 1K+ Cities" which can be downloaded from iTunes App Store or Google Play. Please download the app to your mobile phone or tablet for travel directions for visiting this sight. The app turns your mobile device to a personal tour guide and it works offline, so no data plan is needed when traveling abroad.

Mumbai is a city where modern and traditional lifestyles exist side by side. The city features many impressive religious sites where you can have a peaceful moment and detach from the hustle and bustle outside. Due to the presence of many different religions and sects in Mumbai, the city is home to lots of great temples, churches and mosques. Take our tour to see the most interesting places of...  view more