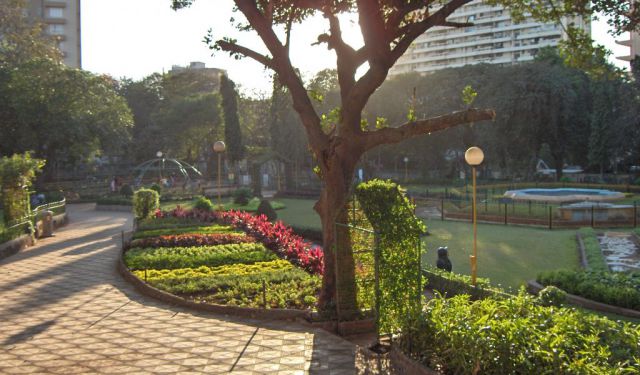 Malabar Hill is the highest point in the south of Mumbai and the city's most exclusive residential area – home to a number of movie stars and business tycoons. It is also the location of several prominent attractions.

Among them are the Hanging Gardens, terraced gardens perched at the top of Malabar Hill with a beautiful sunset views over the Arabian Sea. Walkeshwar Mandir Temple is a shrine dedicated to the Hindu god, Shiva. According to a legend, the Banganga Tank next to the temple was created by the Hindu god Rama when he shot an arrow at this spot.

Malabar Hill is known for its scenic views, historical architecture and luxury mansions. You can follow this self-guided walking tour to explore this beautiful neighborhood of Mumbai at your own pace.
Image Courtesy of Wikimedia and Nichalp.
How it works: Download the app "GPSmyCity: Walks in 1K+ Cities" from iTunes App Store or Google Play to your mobile phone or tablet. The app turns your mobile device into a personal tour guide and its built-in GPS navigation functions guide you from one tour stop to next. The app works offline, so no data plan is needed when traveling abroad.

Located in the Gamdevi precinct, on Laburnum Road in Mumbai, is a two-storied building which was the epicentre for several movements during India’s independence fight, Mani Bhavan. Initially owned by Shri Revashankar Jagjeevan Jhaveri, this historic old-style building was taken over by Gandhi Smarak Nidhi, a National Trust in memory of Mahatma Gandhi, in 1955 to preserve it as a veritable memoir of the father of modern India. A museum, picture gallery, the Library and the Terrace together draw an almost complete picture of the independence struggle as well as the life of Mahatma Gandhi.

For a period of 17 years (1917-1934), the Bhavan served as Gandhi’s Mumbai headquarters and some of the movements crucial to Indian history like the Satyagraha, Swadeshi, Civil Disobedience etc. were initiated here.

The museum captures and portrays Gandhi’s dynamic personality and life through 28 tableaux of dioramas prepared by Sushila Gokhale Patel, along with models of Sabarmati ashram, Phoenix ashram, etc. The gallery also has preserves copies of letters written to Franklin D Roosevelt, Adolf Hitler along with documents and articles written about and by Gandhi, appropriately captioned in both Hindi and English.

A room in the Bhavan on the second floor was formerly the work place for the Mahatma and has been preserved closest to the original setting. Gandhi’s association with the charkha began in this Bhavan and the auditorium plays recordings of Gandhi’s speeches. For historians and biographers, Mani Bhavan is a treasure chest of knowledge.

Babulnath Temple is one of oldest temples Mumbai and it has existed even before the city itself. Worshipped within the temple is Lord Shiva, one of the three Gods of the Hindu Trinity. The faithful climb up to the temple and obtain Darshan of the shivling and obtain blessings of the Lord.

Although the temple was constructed in the late 18th century, it is believed that the idol was worshipped since the reign of Raja Bhimdev during the 12th century. There are many stories that speculate the origin of the idols and temple. According to one particular story, a cow belonging to a wealthy goldsmith stopped giving milk. Many days passed, but the cow would not give milk therefore the goldsmith followed the cow and observed that at one particular spot she would stop and dispense all her milk. The spot was dug up to find the idol which is placed in the temple today.
Image Courtesy of Wikimedia and Rangakuvara.
3

The Zoroastrians first migrated to the Indian subcontinent during the 10th century AD and have since been an integral and important part of the Indian community. The city of Mumbai has always been home to a large population of Parsis. The Tower of Silence was built in 1672, by Seth Moti Hirji. The Tower is where the Parsi community performs the last rites for the departed.

According to Zoroastrian belief, the earth – Zam and fire- Atar are considered pure and divine. The body of the dead is considered as a pollutant and hence the dead are disposed off atop of a tall tower, to be putrefied by the sun and birds of prey. The Tower of Silence is strictly off limits for unauthorized personnel, but the surrounding area is open for visitors and tourists. Despite the obvious nomenclature for the place, the Tower of Silence must not be looked as place of peace and tranquility.
Image Courtesy of Wikimedia and PP Yoonus.
4

Mumbai is one of the most crowded cities, not only in India but the entire world. With its fast paced lifestyle clubbed with swarming streets, the city can get quite overwhelming for a first time visitor. However, one can still find many places to get away from all the hustle bustle of the city life within Mumbai. One such place is the Hanging Gardens.

Located in South Mumbai, the Gardens are very close to the Tower of Silence. A favorite amongst morning walkers and joggers, the Gardens offer a quiet hideout and a place to rejuvenate oneself. Also, the breathtaking view the Gardens offer of Mumbai and the Arabian Sea make this site an excellent place to visit when in Mumbai.

The Gardens were first laid out in 1881 and were renovated in 1921. Built over three reservoirs, the Gardens were built as a brilliant veil over the storage of over 30 million gallons of water underneath. Although the Gardens are popularly known as the Hanging Gardens, due to their location over the Malabar hill, the official name of the park is Pherozeshah Mehta, who was an important politician and activist of that time.

Apart from the breathtaking view and tranquility, the Gardens are filled with well-cut animal shaped hedges. Always a fun visit with friends and family!
Image Courtesy of Wikimedia and A.Savin.
5

Perched on Malabar Hill is the green getaway within the city of Mumbai, the Kamala Nehru Park. Spread over just 4000 square meters, the Park is a common picnic destination for school kids and families. Reachable by all means of public transport, the Kamala Nehru Park is a well maintained park for a quiet day with family and friends.

In contrast to modern day parks, the Kamala Nehru Park has little to offer in terms of amusement rides. Instead, it offers a place away from hustle bustle of the city and the open spaces and green lawns that encourage one to play some long lost picnic games. The Park has a shoe shaped structure, believed to have been inspired by a nursery rhyme, which always manages to fascinate the younger visitors. For the older ones, the location of the Park offers a panoramic view of the city.

One can see the tall rise buildings, the rushing waters at the Chowpatty shore and lighting up of the Marine Drive necklace of lights when the sun sets. Open from 5 in the morning, the Park is a favorite with the city dwellers who like to take time away from the malls and multiplexes sprawling around the city. All in all, the Kamala Nehru Park is a perfect hangout for families.
Image Courtesy of Wikimedia and Nichalp.
6

Built in 1904, the Jain Temple is also known as Babu Amichand Panalal Adishwarji Jain Temple and is dedicated to Lord Adishwar, the first Jain Tirthankar or Arihant (omniscient).

The main entrance of the temple has two delightfully sculpted stone elephants and the sheer beauty of the temple mesmerizes its visitors instantly. The beautiful frescoes on the walls depicting the life of the 24 Jain Tirthankars capture the attention of the tourists as well as devotees alike. The serenity of the place instils a sense of belonging to the temple. The peace and quiet inside the temple premises release one from all the worries of the world.

This temple is much larger than any other Jain temple and has idols of Shri Ghantakaran Mahavir, Ganesha and the black marble shrine dedicated to Lord Parsvanath. The idol of Ganesha takes us back in history to the common origins of Hinduism and Jainism. The dome of the temple is decorated with zodiac signs. For the beauty of the temple and the architecture and the inner peace, it bestows upon all its visitors, the Jain Temple in Mumbai is a must visit if you are in the city.
Image Courtesy of Wikimedia and Nico Crisafulli.
7

Another fascinating temple in South Mumbai is the Walkeshwar Mandir. Dedicated to an incarnation of Lord Shiva, the temple is believed to be one of the oldest temples in the region.

Constructed during the reign of the Silhara dynasty, who ruled the region of Mumbai between 810 and 1240 AD, the architect of the temple was Lakshman Prabhu who was a minister at the King’s court.

Walkeshwar Mandir Temple has a unique and interesting story about its origin. According to legend, Lord Rama on his journey to Lanka, in pursuit of the demon King Raavana, is said to have stopped here. Raavana had abducted Sita, the wife of Rama. On his long journey, Rama was advised to worship a Shivalinga, the idol of Shiva. Failing to get an idol, Rama constructed a linga out of sand, which is believed to be housed in the Walkeshwar Temple.

Close to the temple is a tank called the Banganga Tank. The tank today is a rectangular pool filled with water with steps to lead you in. In spite of its proximity to the sea, the tank is filled with spring water. The spring surfaced only after Lakshman, the brother of Rama shot an arrow at this spot when the latter was thirsty.
Image Courtesy of Wikimedia and Wm Jas.

Mumbai (previously known as Bombay, meaning "good bay") is a thriving metropolis on the shore of the Mumbai Harbor. The city is the financial, commercial, and entertainment capital of India, and a home to three UNESCO World Heritage Sites and Bollywood.

Portuguese took control of Mumbai in 1534. In 1661 they gifted it to the British, as part of the dowry from Catherine of Braganza,...  view more

The seven islands that constitute Mumbai were originally home to the communities of the Marathi language-speaking Koli people whose main religion is Hindu. Under the Mughal Imperial rule, Mumbai began to adopt Islam, so today roughly 20% of the local population are Muslims.

When the Portuguese took over the city in 1534, they actively enforced the Roman Catholic order, followed later by the...  view more