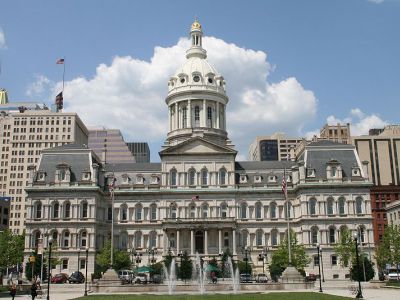 The site for the "new" building was selected and some designs were submitted before the American Civil War. The cornerstone for the building, under Frederick's new design, was not laid until 1867. At a cost of more than $2 million, Baltimore City Hall is built largely of brick with the exterior walls faced with white marble. The marble alone, quarried in Baltimore, cost $957,000. The segmented dome capping the building is the work of Baltimore engineer Wendel Bollman, known for his iron railroad bridges. At the time of its construction, the cast iron roof was considered one of the largest structures of its kind.
Image Courtesy of Marylandstater.
Sight description based on Wikipedia.